The ‘Football-Talk’ Team of the Weekend: Suarez + Toure Unstoppable

Chelsea gave Arsenal a beating, Liverpool thrashed Cardiff, and Manchester City demolished Hull. Where to begin with the Team of the Weekend!? Have a look here.

Producing a team of the week is never an easy job, but when 42 goals are smashed in in just 10 Premier League games, constructing a best XI is a genuine struggle.

Some of the usual suspects were at it again over the weekend, with Luiz Suarez inspiring Liverpool to a 6-3 win at Cardiff; while a Yaya Toure hat-trick set City on their way to a 5-0 win over Fulham.

Chelsea showed Arsene Wenger that he has still much to learn despite his 1000 game milestone, handing out a savage 6-0 beating at Stamford Bridge; while Manchester United reached second gear against West Ham, with Wayne Rooney’s Beckham-esque effort from the half-way the highlight in the comfortable 2-0 win.

Check out the ‘Football-Talk’ Team of the Weekend for game-week 31: 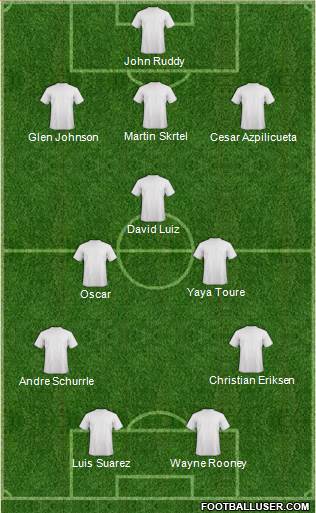 With so many goals flying in this weekend, I’ve plumped for the Norwich number one, with his clean sheet and superb close-range stop from Sunderland’s Wes Brown helping the relegation-threatened Canaries to a crucial three points.

The England man had great work rate, and provided super service throughout Liverpool’s 6-3 win at Cardiff.

Another brace from Liverpool’s goal-scoring sensation, and he isn’t Uruguayan! Skrtel struck twice in 13 minutes, either side of half time, to put Liverpool in the driving seat against a stubborn Cardiff.

Arguably his best performance in a Chelsea shirt; Azpilicueta was very much like Philipp Lahm on the left for the Blues, bombarding forward against a beleaguered Arsenal backline, while maintaining good discipline defensively.

The reason for my badly organised formation! I am such a fan of the Brazilian in that defensive midfield role, as his high-octane approach from start to finish is just so effective, even against top four opposition.

The two best Chelsea performances this season were against City at the Etihad, and on Saturday against Arsenal. David Luiz was key in both matches.

City captain for the day, Toure had another barnstorming performance against a poor Fulham outfit, with the Ivorian bagging a brilliant hat-trick, proving once again that he is one of the best players in the world at present.

It was right place, right time for Chelsea’s Brazilian youngster against Arsenal on Saturday, as the 22-year-old netted a brace, taking his personal tally to eight league goals for the season.

Spurs had to overcome a two-goal deficit against a plucky Southampton on Sunday, and considering the Saints’ decent defensive record this season, Christian Eriksen’s brace and assist was all the more impressive.

Afforded a starting berth in the absence of the suspended Willian, Schurrle was just excellent against a woeful Arsenal. Set up the first, and scored the second; the German’s early actions practically ended the match before the quarter hour mark.

There he is! Mr Suarez bounds into yet another Team of the Week with yet another hat-trick! That’s 28 goals for the season for Liverpool’s man-of-the-moment, and with the club still gunning for the title, Suarez’ stunning campaign may yet herald the most wonderful of endings for the Merseysiders.

It was quite a strike. Rooney’s first half volley from the half-way line was one of the goals of the season, with West Ham keeper Adrian helplessly falling over in a vain attempt to get a hand to the ball as it flew past him for United’s first on the day.

It was an impressive overall showing from Rooney, who seems eager to take the place of the injured Van Persie as the side’s premier goalscorer. His second on the day wrapped up the points for the Red Devils, who looked much like their old selves.

Goal of the weekend: Wayne Rooney vs West Ham

Do you agree with my team of the week? Share your views below…..