Liverpool entertain Sunderland at Anfield tonight looking to close the gap at the top of the league to just one point. Here’s our predicted line-up for the game

Liverpool entertain Sunderland at Anfield tonight looking to close the gap at the top of the league to just one point. Here’s our predicted line-up for the game.

Brendan Rodgers has virtually a fully-fit squad to choose from with only Jose Enrique missing. The left-back has missed much of the season with a knee injury and is unlikely to feature again this season.

In the Spaniard’s absence, young Jon Flanagan has impressed and is expected to retain his place in the back-four, but Rodgers may take this opportunity to hand Mamadou Sakho his first start of 2014 after he returned to full fitness following a serious hamstring injury. Daniel Agger is likely to make way.

Steven Gerrard is walking a tightrope as he’s just one booking away from a two-match suspension so there’s a chance Rodgers may opt to rest his skipper with Lucas Leiva on stand-by to return to the side. However, I feel Gerrard will still play alongside Jordan Henderson in midfield.

Raheem Sterling is likely to get a recall after he was on the bench for Saturday’s 6-3 win over Cardiff City, with Joe Allen the most likely to drop out. Otherwise, Rodgers is expected to stick with much of the side that’s served him so well this season. 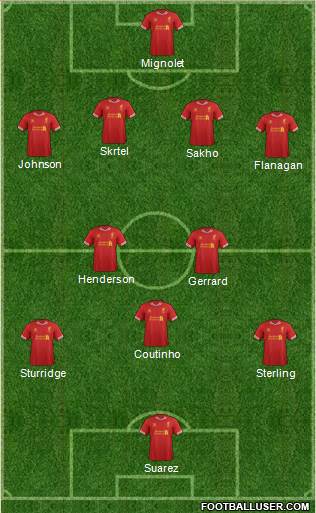