Chelsea take on Crystal Palace at Selhust Park on Saturday looking to cement their place at the top of the table. Here is our predicted team for the game.

Chelsea make the short trip across London to take on Crystal Palace at Selhust Park on Saturday afternoon looking to cement their place at the top of the table. Here is our predicted team for the game.

Jose Mourinho is not expected to rest too many of his key men ahead of Wednesday’s Champions League first leg against Paris Saint-Germain, but we could see a couple of changes.

The back-five is likely to remain unchanged from the side that thrashed Arsenal 6-0 last weekend but Frank Lampard could come in for David Luiz in midfield with the Brazilian rested, while Ramires remains out through suspension.

Eden Hazard could also get a breather ahead of the big game at the Parc de Paris with Andre Shurrle starting in attack after his impressive display against the Gunners. Willian is expected to come straight back in after being suspended last week and could be joined by Oscar in attack.

Fernando Torres is almost certain to lead the line up front with Samuel Eto’o ruled out after picking up an injury early on last weekend. Here’s the team we think Mourinho will put out: 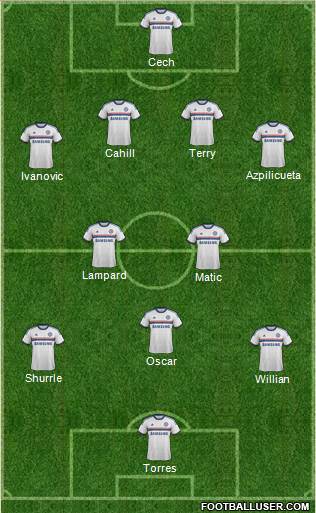 What do you think of our team? What line-up would you pick? Share your views below….