Liverpool face West Ham at Upton Park looking to maintain their place at the top of the Premier League table. Here’s our predicted team for the big game.

Liverpool face West Ham at Upton Park on Sunday looking to maintain their place at the top of the Premier League table. Here’s our predicted team for the game.

Brendan Rodgers confirmed earlier today that his squad is in great shape and he has no fresh injuries to worry about, with only Jose Enrique missing.

The Northern Irishman has been playing a settled side for weeks now and it’s worked a treat as the Merseysiders have won eight on the bounce to charge to the top of the table, so we see no reason why that should change this weekend.

Raheem Sterling, Philippe Coutinho and Joe Allen are the only players who’ve been rotating in recent weeks and we can see Rodgers going for Allen in midfield alongside Steven Gerrard and Jordan Henderson this week to offer a little more solidity in the middle of the park.

Coutinho is the player most likely to make way as Sterling needs to be retained for his pace – which should give the Hammers defence plenty of problems – with the youngster likely to start in attack alongside Suarez and Sturridge.

The back-four should remain unchanged so Jon Flanagan will continue to deputise at left-back, while the fit-again Mamdou Sakho will have to make-do with a place among the substitutes.

Here is the side we think Rodgers will go with: 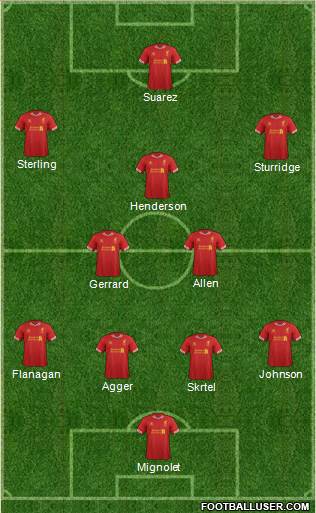 What do you think of our team? What line-up would you select? Share your views below.