Chelsea take on PSG in the second leg of their Champions League quarter final clash at Stamford Bridge on Tuesday night, here’s our predicted lteam for the game

Chelsea take on Paris Saint-Germain in the second leg of their Champions League quarter final clash at Stamford Bridge on Tuesday night. Here’s our predicted line-up for the game.

Jose Mourinho is almost certain to stick with his favoured back-five for the game with Petr Cech, Branislav Ivanovic, Gary Cahill, John Terry and Cesar Azpiliceuta all expected to retain their places.

However, we are likely to see a couple of changes in midfield from the side that beat Stoke City 3-0 on Saturday. Nemanja Matic is once again ineligible so David Luiz could come in to play the defensive midfield role as he did in the first leg last week.

The Brazilian is likely to be joined by his compatriot Ramires unless Mourinho decides to deploy veteran Frank Lampard for his goal-threat, but with the 35-year-old playing 70 on Saturday I think we’ll see him among the subs tomorrow.

Eden Hazard and Oscar were rested against Stoke so the pair are expected to be restored to the attack alongside Willian, with Andre Shurrle and the ineligible Mohamed Salah dropping out.

Reports today claim that Mourinho is hopeful striker Samuel Eto’o will be passed fit to play after missing the last three games with a hamstring injury, so Fernando Torres is likely to miss out. 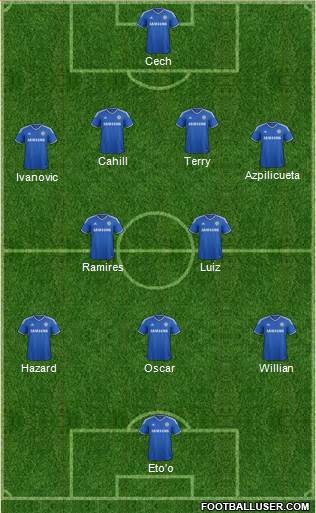