Arsenal take on Championship side Wigan Athletic at Wembley on Saturday evening in the semi finals of the FA Cup. Here is a predicted line-up by Gooner Mac.

Arsenal take on Wigan Athletic at Wembley on Saturday evening in the semi finals of the FA Cup. Here is a predicted line-up by Gooner Mac.

Arsene Wenger confirmed our mounting injury worries at his press conference on Thursday morning and we could be without up to 11 first team squad players for whats arguably the most important game of our season so far.

The boss revealed that Kieran Gibbs, Alex Oxlade-Chamberlain and Tomas Rosicky are all major injury doubts for the game but he’ll give them until the last minute to prove their fitness.

If Gibbs fails to make it, it’s likely we’ll see an unchanged back four as Laurent Koscielny is still short of fitness following a calf injury, but Arsene did confirm that Lukasz Fabianski will start in goal in place of Wojciech Szczesny and Aaron Ramsey will make his first start since picking up a thigh injury against West Ham back on Boxing Day.

Mathieu Flamini is suspended and with The Ox and Rosicky doubts and Mesut Ozil and Jack Wilshere still injured, we might have no choice but to hand a start to January loan signing Kim Kallstrom. We are down to the bare bones and can’t even call on Ryo Miyaichi – who’s been ruled out for the season – while Serge Gnabry also missed the Everton game through injury, so Arsene may decide to play the Swede alongside Arteta and move Ramsey further forward.

This would see Santi Cazorla start on the right side with Lukas Podolski once again on the left. Hopefully Oxlade-Chamberlain and/or Rosicky are passed fit to give us more options in the attacking third, but I’m basing this predicted team on the assumption they are unavailable, so I don’t see Arsene having much choice over who he picks in attack.

Olivier Giroud has been pretty poor lately but with just Yaya Sanogo to choose from behind him, I think we’ll see the Frenchman lead the front-line. Here’s the team I think we’ll see on Saturday if none of the injury doubts are passed fit: 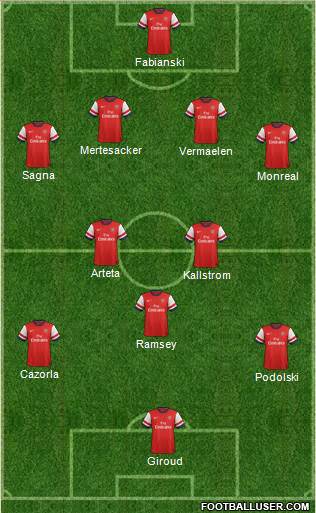 What do you think of my team? What team would you play? Share your views below…