Chelsea will be in Wales this weekend to take on Swansea City at the Liberty Stadium on Sunday. Here’s the team news and predicted line-up for the game.

Chelsea will be in Wales this weekend to take on Swansea City at the Liberty Stadium hoping to give their title hopes a major boost.

The Blues will be buoyed by their win over Paris Saint-Germain in midweek which booked a date with Atletico Madrid in the last four of the Champions League, but it will be domestic matters at hand on Sunday.

The big team news is that Eden Hazard is set to miss out after aggravating a calf injury during the early stages against PSG but Ramires returns to the squad after serving a domestic three-match ban following his sending off against Aston Villa last month. The Brazilian could come straight in to the side although Andre Schurrle and Mohamed Salah are also pushing for starts in attack.

Jose Mourinho has no other injury concerns so is unlikely to tamper too much with his back five, but Nemanja Matic is almost certain for a recall in midfield after being ineligible in midweek. The Serb could play alongside David Luiz after his impressive display last time out.

Samuel Eto’o returned from a hamstring injury on Tuesday and showed no ill-effects so could retain his place, but Demba Ba must surely be in Mourinho’s thoughts after coming off the bench to score the all-important second goal to send the Blues through to the semi finals. 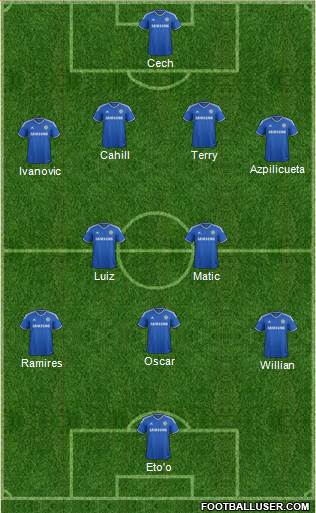