Arsenal play host to West Ham at the Emirates tonight with a win needed to climb back into the top four of the Premier League. Here is a preview with team news

Arsenal play host to West Ham at the Emirates tonight with a win needed to climb back into the top four of the Premier League.

We currently sit two points adrift in fifth after Everton’s win over Sunderland on Saturday and now have to hope the Toffees slip up if we want to secure that all-important Champions League qualification place.

A disastrous run has seen us win just three of our last 11 Premier League games, but we do have the more favourable run-in on paper as Everton have to play both Manchester clubs so five victories from our remaining fixtures should be good enough to secure fourth.

We head into tonight’s game after a penalty shoot-out win over Wigan on Saturday evening that booked a place in the FA Cup final, but the gruelling encounter is certain to have taken a lot out of the players so I’d expect a few changes to be made by Arsene Wenger.

West Ham arrive off the back of six wins in 10 games which has seen them move seven points clear of the relegation zone, so they are almost guaranteed to be safe for another season.

Sam Allardyce has already secured an impressive 3-0 win over Tottenham at White Hart Lane and held Chelsea to a 0-0 draw at Stamford Bridge this season, so we should know this isn’t going to be an easy game tonight.

Arsene confirmed on Monday that we have several doubts for the game after a number of players suffered knocks against Wigan. Aaron Ramsey played over 110 minutes after making his first start in over three months so he’s expected to drop back to the bench.

Alex Oxlade-Chamberlain and Lukas Podolski are expected to be passed fit despite suffering from tight muscles, but Nacho Monreal is a doubt after being stretchered off with a dead leg during the second half against Wigan.

Tomas Rosicky and Laurent Koscielny came through late fitness tests so should come back in to the side and they could be joined by Kim Kallstrom, with the Swede in-line to make his full debut with Mathieu Flamini serving the second of his two-game ban.

Abou Diaby and Mesut Ozil are back in training but this game will come too soon, while Jack Wilshere, Serge Gnabry and Theo Walcott remain out.

The Hammers will give a late fitness test to Kevin Nolan after he was forced off during last weeks 2-1 defeat to Liverpool with a tight hamstring, but the skipper is expected to be passed fit to start.

Joey O’Brien is back in training and could feature but James Collins is likely to once again miss out and will join George McCatney and Maco Borriello on the sidelines. 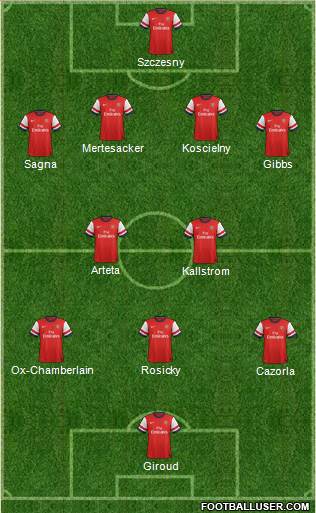 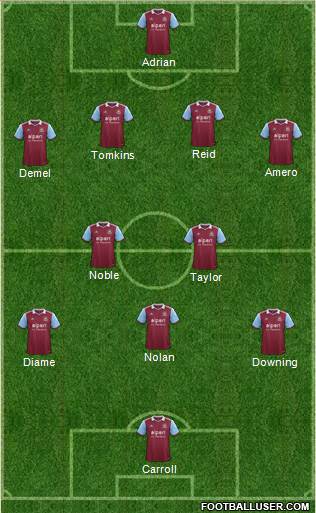 Per Mertesacker: The big German is going to have his hands full tonight trying to handle the threat of Andy Carroll in the West Ham attack. If Per can keep him quiet we have a good chance of shutting the visitors out.

Arsenal are rightly the bookies favourites to win the game as we’re at home and have won our last seven on the bounce against West Ham. You can currently get odds of about 2/5 for a home win but that doesn’t represent good value for a game as awkward as this.

My betting tip is to back Arsenal to win 2-1 which is a far more tempting 15/2 and if you’re feeling really adventurous, throw in Lukas Podolski as the first goalscorer and the odds shoot-up to 40/1. But remember, I’m not a betting expert, I’m just passing on my personal tips for a bit of fun so if you plan on wagering serious money you should check out a betting guide to help you make a more informed choice.

I can see this being a tight game as West Ham are going to make it difficult for us and will no doubt set up for the draw. I worry about our fitness levels after Saturday’s energy-sapping game but hopefully we should have too much quality for them in the end. A nervy 2-1 win will see us go fourth for at least 24 hours ahead of Everton’s home game against Crystal Palace on Wednesday.