Liverpool take on Norwich at Carrow Road on Sunday looking to cement their place at the top of the Premier League. Here is our predicted line-up for the game.

Liverpool take on Norwich City at Carrow Road on Sunday afternoon looking to cement their place at the top of the Premier League. Here is our predicted line-up for the game.

Brendan Rodgers has taken his side on an incredible 10-game winning run so he’s rightly going to stick with the majority of the team that’s served him so well in recent months.

However, the Northern Irishman will be forced into at least one change after Jordan Henderson was dismissed for a rash late challenge during the closing stages of last weekends 3-2 win over Manchester City.

Lucas Leiva is pushing for a recall to replace the England midfielder but I think we’ll see Joe Allen come in alongside Steven Gerrard. Allen has a good work ethic, much like Henderson, and is economical with the ball so should slot right in.

The back five is expected to remain unchanged with Mamadou Sakho keeping Daniel Agger out the team after an impressive display last week, while Jon Flanagan will continue to deputise for the injured Jose Enrique.

The big question mark is whether Daniel Sturridge will make the trip to East Anglia. The striker was forced off with a hamstring injury against City and Rodgers has hinted the 24-year-old might just be a little short this weekend. With a huge title-decider against Chelsea coming up, I don’t think the Merseysiders will take any chances with Sturridge so there will be a void to fill in attack.

The most likely candidate to come in is Victor Moses and he could start on the right with Luis Suarez playing through the middle, supported by Raheem Sterling and Philippe Coutinho.

Here’s the team I think we could see on Sunday: 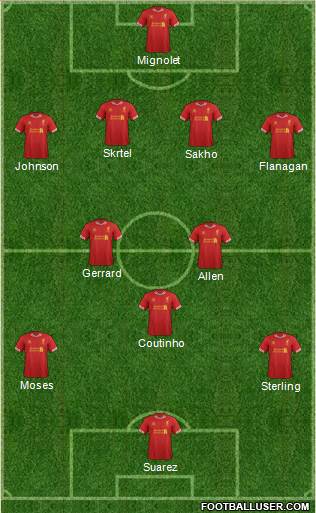 What do you think of our team? Share your views below…