Chelsea are in Spain ahead of tomorrow night’s Champions League semi final first leg with Atletico Madrid, here’s our predicted line-up for the game.

Chelsea are in Spain ahead of tomorrow night’s Champions League semi final first leg with Atletico Madrid, here’s our predicted line-up for the game.

Jose Mourinho has been boosted by the return of Petr Cech after the goalkeeper missed Saturday’s disappointing 2-1 defeat to Sunderland through illness. The Czech international travelled with the rest of the squad on Monday afternoon and is expected to replace Mark Schwarzer in goal.

Branislav Ivanovic is suspended for the game after picking up three yellow cards so Cesar Azpilicueta should revert to right-back with Ashley Cole getting a rare run-out on the left side of defence.

Nemanja Matic is ineligible so David Luiz could be partnered by Frank Lampard in midfield with Ramires selected ahead of Oscar if Mourinho wants to add more solidity and strength to the middle of the park.

Eden Hazard has also made the trip despite missing recent weeks with a calf injury he picked up against PSG two weeks ago, but Samuel Eto’o has been left back in London with a knee knock he suffered at the weekend. In his absence, Fernando Torres and Demba Ba will fight-it-out for the striker role and we think the Spaniard might get the nod, despite Ba scoring two in his last three games. 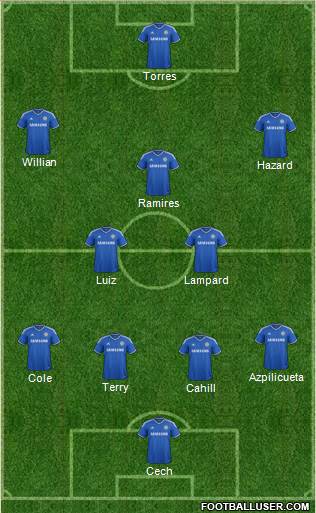 What do you think of our team? What line-up would you go with? Share your views below.