Here’s a match preview as Liverpool look to take a huge step towards the Premier League title when they take on Chelsea at Anfield on Sunday afternoon.

Liverpool will look to take a huge step towards the Premier League title when they take on Chelsea at Anfield tomorrow.

The Reds hold a five point lead over the West Londoners at the top of the table while Manchester City are a further point behind with a game in hand, so Brendan Rodgers men need just seven points from their remaining three games to secure their first title in 24 years.

The Merseysiders have surged to the top of the table thanks to a sensational 11-game winning streak, with the latest being a narrow 3-2 win over Norwich City at Carrow Road last weekend. If they can make it 12 on the bounce tomorrow then Liverpool will be red-hot favourites to lift the Premier League trophy this season.

Chelsea arrive at Anfield off the back of Tuesday’s hard fought 0-0 draw against Atletico Madrid in the first leg of their Champions League semi final, and Jose Mourinho has hinted he’ll field a weakened team tomorrow in order to rest his key men ahead of Wednesday’s return leg at Stamford Bridge.

It remains to be seen whether the Portuguese coach follows through with his threat but you couldn’t blame him for prioritising Europe after the Blues shock 2-1 defeat to Sunderland last weekend left them needing a miracle to lift the title.

Liverpool are sweating on the fitness of striker Daniel Sturridge and will give him until the last minute to prove he’s fit enough to take part after picking up a hamstring strain against City two weeks ago. However, the 23-goal hitman has said he’s confident he’ll be in contention so it looks like he’s winning his battle to play against his former club.

Jordan Henderson serves the second of his three-match ban so Joe Allen is likely to continue to deputise in midfield, while Jon Flanagan will once again start at left-back with Jose Enrique out for the season with a knee injury.

As previously mentioned, it’s difficult to know what kind of side Mourinho will put out for the game, but he’s certain to be without goalkeeper Petr Cech after he picked up a shoulder injury in midweek, while skipper John Terry has also been ruled out with an ankle knock.

Midfielder Ramires has been slapped with a four-match ban after being found guilty of elbowing Seb Larsson last week, and Eden Hazard is a major doubt as he continues to recover from a calf injury.

Frank Lampard and John Obi Mikel are almost certain to feature as they are suspended on Wednesday, while Nemanja Matic and Mohamed Salah are also likely to play as they will be ineligible to face Atletico on Wednesday. 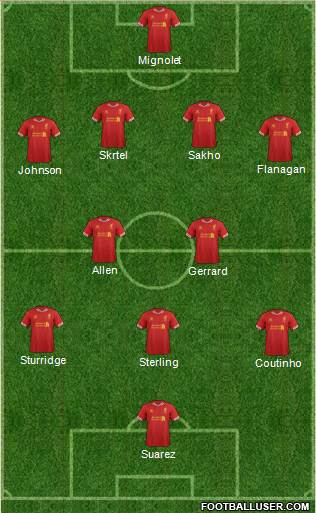 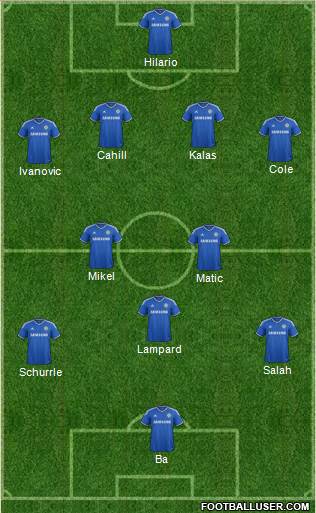 Luis Suarez: The Uruguayan will once again be the focal point of the Liverpool attack and his link-up play with the likes of Sturridge, Sterling and Coutinho is going to be vital tomorrow. If they click, it will be almost impossible for Chelsea to keep them out.

Liverpool 2-1 Chelsea: Assuming Mourinho fields a team similar to the one above, I think we’ll still see a tight game but ultimately one that Liverpool will edge. If the Blues boss does ‘play the kids’ then it should be a little more comfortable for the home side.