The PFA Team of the Year has been announced at the awards evening this evening and Liverpool and Chelsea players dominate proceedings. See the team here.

The PFA Team of the Year has been announced at the awards evening this evening and unsurprisingly Liverpool and Chelsea players dominate proceedings.

The Merseysiders currently lead the Premier League by two points from second-placed Chelsea after Jose Mourinho’s men won 2-0 at Anfield earlier today and the two teams make-up six of the starting eleven, with three apiece.

For Liverpool, skipper Steven Gerrard makes it into the midfield along with deadly strike duo Daniel Sturridge and Luis Suarez – who is the red-hot favourite to lift the individual award.

Chelsea’s Petr Cech has been picked in goal while Gary Cahill has been rewarded for his excellent season at the back, and attacker Eden Hazard is the third Blues player to make the team after the Belgian’s scintillating displays this season.

The Belgian’s team mate Yaya Toure is also unsurprisingly selected after another sensational season and Adam Lallana has been rewarded for his breakthrough campaign with a place in midfield.

Those unlucky not to make the team but were among the ‘subs’ include Arsenal ace Aaron Ramsey – who would have arguably been in the starting eleven had he not got injured back in December – and Liverpool winger Raheem Sterling. A full list of the subs can be seen below.

Here’s how the team lines-up: 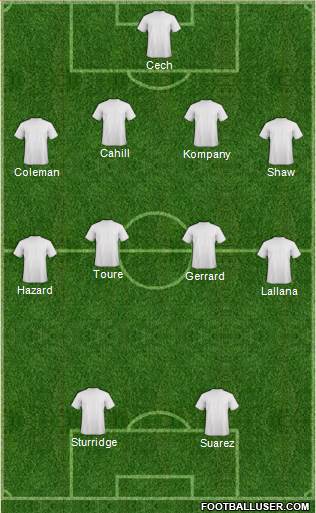 It’s certainly an impressive line-up that is also well balanced. We have two solid centre-backs, adventurous full-backs, plenty of experience and flair in midfield and two deadly strikers. I’m sure this side would take some stopping in the Premier League!

What do you think of the team? What players should have been selected? Share your views below.