Chelsea take on Atletico Madrid at Stamford Bridge tomorrow in the second leg of their Champions League semi final. Here is the team news and a predicted team

Chelsea take on Atletico Madrid at Stamford Bridge tomorrow night in the second leg of their Champions League semi final. Here is the latest team news and a predicted line-up.

Jose Mourinho confirmed at his pre-match press conference this afternoon that John Terry is fit to start after recovering from the ankle knock he suffered in last weeks first leg in Spain.

The skipper will come back into the side alongside Gary Cahill – who was rested for Sunday’s 2-0 win over Liverpool – with Ashley Cole the one likely to make-way despite his impressive display at Anfield.

Petr Cech trained this afternoon but Mourinho hinted he won’t be fit enough to start, so Mark Schwarzer is likely to keep his place in goal. David Luiz and Ramires are also expected to start in midfield with Frank Lampard and John Obi Mikel suspended, while Nemanja Matic is ineligible.

Eden Hazard is expected to return to the side after training on Monday and the Belgian could line-up alongside Oscar and Willian in attack behind Fernando Torres, who is favourite to start up front against his former side.

Here’s the team we think Mourinho will do with: 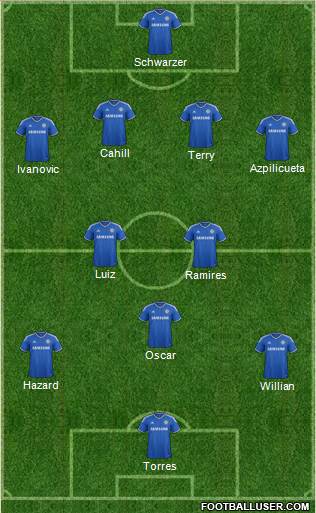 What do you think of the team? What side would you pick? Share your thoughts below.