Arsenal will look to secure a top four finish when they take on West Bromwich Albion at the Emirates on Sunday afternoon. Here is Gooner Macs predicted team.

Arsenal will look to secure a top four finish when they take on West Bromwich Albion at the Emirates on Sunday afternoon. Here is Gooner Macs predicted team.

Arsene Wenger has confirmed that Bacary Sagna is a doubt for the game after picking up a knee injury in training. The boss is unlikely to take any risk with the Frenchman so Carl Jenkinson is likely to start at right-back.

Kieran Gibbs is close to returning from a hamstring injury that kept him out of the last four games but this game will come too soon, so Nacho Monreal should continue at left-back.

Jack Wilshere is also closing in on a comeback after returning to full training but Arsene is being cautious with him so he won’t feature in this game, meaning Mikel Arteta and Aaron Ramsey are likely to continue in midfield.

Alex Oxlade-Chamberlain is out with a groin problem but Tomas Rosicky is pushing for a recall after being left on the bench in recent games. However, I think the boss will stick with the majority of the side that started in Monday’s 3-0 win over Newcastle, so Santi Cazorla, Lukas Podolski and Mesut Ozil should play behind Olivier Giroud in attack.

Here’s the team I think will start: 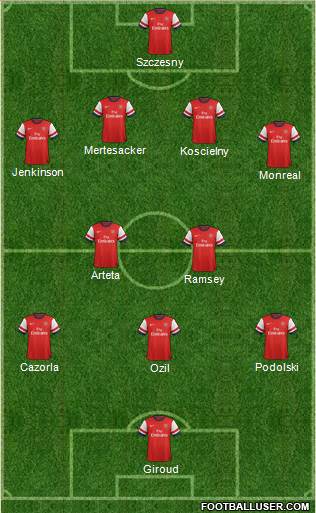 If we can beat West Brom, we can then rest a few players against Norwich on the final day ahead of the FA Cup final and this team should have more than enough to get past the Baggies this weekend.

What team would you start this weekend? Share your views below….