Liverpool will be looking to go clear at the top of the Premier League table when they take on Crystal Palace at Selhurst Park tonight. Here’s a preview.

Liverpool will be looking to go clear at the top of the Premier League table when they take on Crystal Palace at Selhurst Park tonight.

The Reds currently sit second on goal difference following Manchester City’s 3-2 win over Everton on Saturday with two games to play and with the Citizens boasting a +9 goal difference, Brendan Rodgers will not only be hoping for three points tonight, he will be going in search of goals to cut the deficit.

A win would see the Merseysiders move three points clear and put the pressure on City ahead of their clash with Aston Villa on Wednesday, while both clubs will be at home on what promises to be a fascinating final day of the season.

However, Rodgers will know he’s in for a tough game this evening, despite Palace already being safe and with little left to play for. Tony Pulis has done a remarkable job since taking over at the turn of the year, taking the club from bottom to comfortably mid-table.

Not surprisingly, Pulis’ success has been based on a well organised team that’s difficult to break down, and the Eagles have in fact conceded fewer goals than title chasing Liverpool and have won five of their last six games – the same record as the visitors.

Liverpool will give striker Daniel Sturridge until the last minute to prove his fitness after he barely trained last week following a hamstring injury. However, given the magnitude of the game, I think we’ll see Sturridge start in attack.

Jordan Henderson serves the final of his three-match ban so Joe Allen and Lucas Leiva will vie for a place alongside Steven Gerrard in midfield.

Jose Enrique remains out so John Flanagan will continue to deputise at left-back, while Mamadou Sakho should keep Daniel Agger out of the side once again.

Palace on the other hand have a fully-fit squad to choose from now that midfielder Kagisho Dikgacoi is back in contention having missed last weeks defeat to Man City. 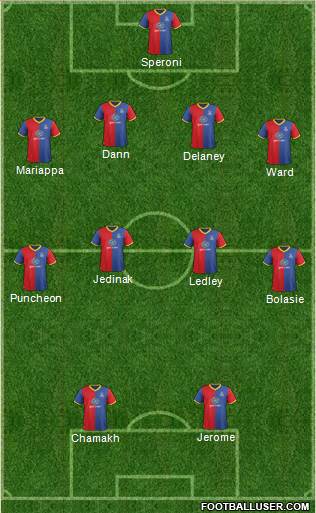 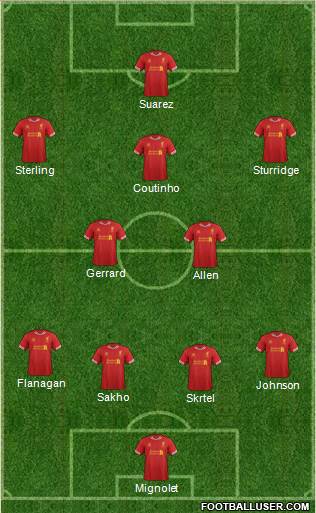 Luis Suarez: Liverpool need goals tonight and with Daniel Sturridge not expected to be 100% fit, the onus will be on Suarez to step up and provide the goal-threat in attack.

Crystal Palace 1-2 Liverpool: Palace are going to be a stubborn side to break down, but as we saw against City, their intensity has dropped off slightly as they have little left to play for and we can see Liverpool edging it tonight.