Whoever runs Tottenham’s Twitter account may have some explaining to do after they mocked Liverpool following their capitulation against Palace on Monday.

Whoever runs the official Tottenham Twitter account may have some explaining to do after a tweet was sent out this evening mocking Liverpool following their capitulation against Crystal Palace on Monday night.

Goals from Joe Allen, Daniel Sturridge and Luis Suarez saw the Reds race into a 3-0 lead at Selhurst Park and it looked as though the Merseysiders were all-set to go three points clear at the top of the table and put the pressure on Manchester City ahead of their clash with Aston Villa on Wednesday.

However, Brendan Rodgers watched on and saw his side blow their three-goal lead in the final 12 minutes to eventually draw 3-3 and hand a huge advantage to City in the title race.

Rival fans were quick to poke fun at Liverpool on social media networks with a variety of meme’s and vine’s doing the rounds, but it came as a surprise when the official Tottenham Twitter account got involved when they shared a vine video mocking the Anfield club along with a tweet saying ‘brutal but very funny. The biggest capitulation since Newcastle in the 90s’.

The tweet has since been removed but not before screenshots were taken as evidence (see below). You can also watch the vine video that the Spurs account shared, but it looks like Tottenham might be on the look out for a new social media executive tomorrow….. 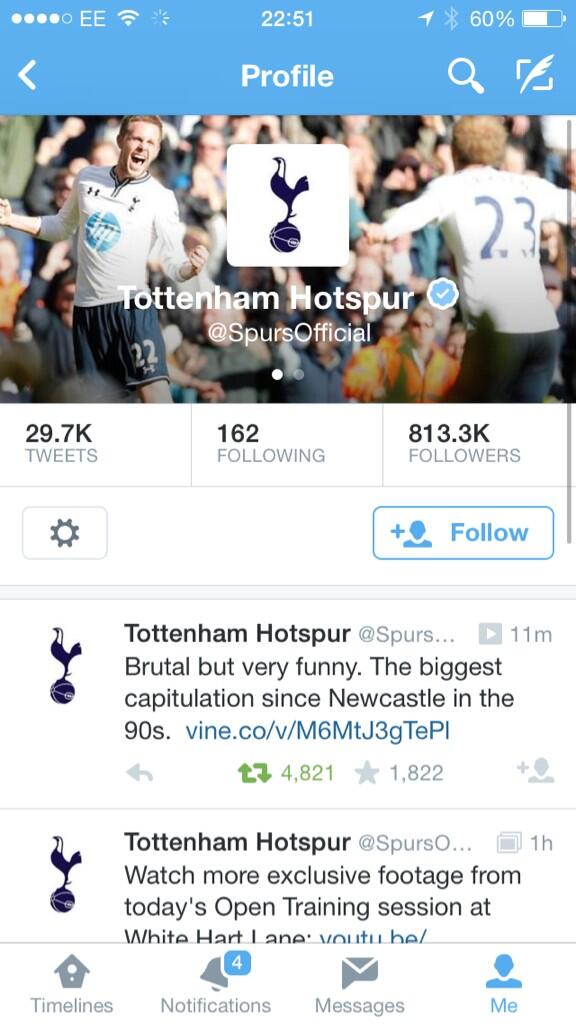