Transfer News: Xavi Linked With Surprise Move As Barca Prepare To Cash In

Barcelona ace Xavi is being offered to Premier League clubs with Arsenal, Man United and Man City among those who are keen on snapping up the Spanish playmaker

As we approach the opening of the summer window clubs will be intensifying their efforts in the transfer market so we’ll bring you all the latest news and gossip. Today, Xavi Is linked with a move to the Premier League. 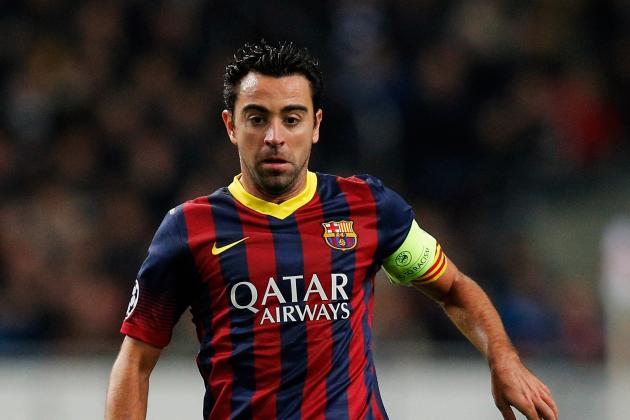 Barcelona ace Xavi is being offered to Premier League clubs with Arsenal, Manchester United and Manchester City among those who are keen on snapping up the Spanish playmaker, according to reports today.

Xavi has been with Barca his entire career, and after joining the club as an 11-year-old he worked his way through the youth ranks before breaking into the first team set up in 1998.

He’s gone on to make over 700 appearances for the club and has won pretty-much everything there is to win in football, with 7 La Liga titles and 3 Champions League’s among the 22 trophies he’s lifted at club level, not to mention the FIFA World Cup and 2 European Championships he’s won with Spain.

The former World Player of the Year is widely regarded as one of the finest footballers of his generation but could his time at Barcelona be set to come to an abrupt end?

Well, the Daily Star are reporting that with the Catalans preparing to overhaul their squad this summer, Xavi could be set for the chop and the 34-year-old’s agents are believed to have been offering the playmaker to the Premier League’s top clubs.

The newspaper claims that Arsenal, Man Utd and Man City have all shown a keen interest and are prepared to offer Xavi that one last big move he’s looking for before he heads over to the US to see-out his final playing days in the MLS.

Xavi still has two more years left on his current contract at the Nou Camp and the report doesn’t give any indication of how much the English trio may have to splash out to land the Spanish international, but it does state that the player is looking for a deal worth around £150,000-a-week.

Whether the likes of Arsenal, City or United would be prepared to meet his wage demands remains to be seen but I’d love to see Xavi test himself here in the Premier League, as despite his age, he’s still one of the best in the business and would be a great addition to English football.

Arsenal are expected to be in the market this summer but I’m not sure Xavi is exactly the type of player the north Londoners need. However, Arsene Wenger may find it difficult to pass up the opportunity to bring the veteran midfielder to the Emirates if it presents itself.

United and certainly going to be busy this summer rebuilding their squad and although the focus should be on youth, a player like Xavi could revolutionise their style of play as they’ve badly missed creativity in the middle of the park this season.

City are always linked when a big-name player is involved but with the club set to be hit by sanctions for failing to meet FIFA Financial Fair Play rules, they may find it difficult to justify splashing out on a player who offers little in terms of sell-on value.

I still find it hard to believe that Barcelona would be willing to sell Xavi, but stranger things have happened and if he does leave the Nou Camp this summer, let’s just hope he opts to join a Premier League club.