Arsenal will look to end a 9-year trophy drought when they take on Hull at Wembley on Saturday in the final of the FA Cup. Here is Gooner Mac’s predicted team

Arsenal will look to end a nine-year trophy drought when they take on Hull City at Wembley on Saturday evening in the final of the FA Cup. Here is Gooner Mac’s predicted line-up.

Lukasz Fabianski has started in every previous round of the cup so far and there is a strong argument that he’ll start this weekend. Arsene Wenger somewhat surprisingly picked him for our last game of the Premier League against Norwich last Sunday and I think the boss was giving him a ‘warm up’ match before the big one.

The defence should pretty-much pick itself. Kieran Gibbs returned from injury last week so assuming he’s come through unscathed I think we’ll see him start alongside Per Mertesacker and Laurent Koscielny.

Bacary Sagna looks like he’s set to play his final game for the club so fingers crossed he gets the send off he deserves by lifting the FA Cup. He’s been a superb professional for AFC and it’s just a shame we haven’t been able to agree terms over a new deal.

Midfield should also be pretty straight forward as Jack Wilshere isn’t fit enough to start so it should be Mikel Arteta alongside Aaron Ramsey in the middle of the park. Mesut Ozil and Santi Cazorla are certs to start in attack and they are likely to be joined by Lukas Podolski with the German cementing himself as a regular in recent weeks.

There has been a lot of talk about who will start up front but I think the decision is simple. Olivier Giroud HAS to start. Yaya Sanogo has done okay in previous rounds but this game is too huge to risk him from the beginning. Giroud has been in good form of late and is clearly the better option, and we simply have to win this game so I hope Arsene goes with the former Montpellier man up top. 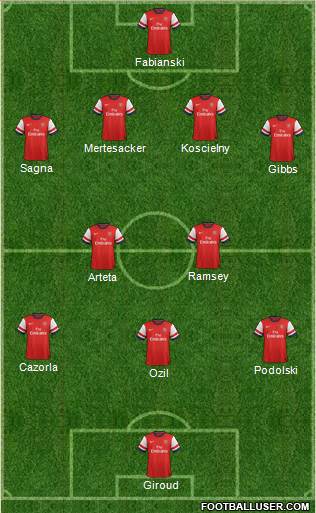 What team do you think Wenger will put out? Share your vies below.