England get their World Cup underway with their Group D opener against Italy on Saturday night, kicking off at 11pm UK time. Here’s a preview with betting tips.

England get their 2014 World Cup campaign underway with their Group D opener against Italy on Saturday night, kicking off at 11pm UK time.

Roy Hodgson’s men head into the tournament with little expectation and I feel that will work in our favour as previous squads have simply not been able to cope with the pressure of the nation on their shoulders.

If he picks the right team, I actually think we could surprise a few people but the first port of call is to get out of a tough group that contains Italy along with Uruguay and Costa Rica.

The Italians are rightfully the bookmakers favourites to progress from the group at odds of 1.35, while Uruguay are second favourites at 1.50 and England at 1.60. There’s no way Uruguay have a better squad than England but they’ll be able to cope with the weather better and they have Luis Suarez and Edinson Cavani up front, so are capable of beating anyone.

Tomorrow’s first game against Italy is likely to be an extremely cautious match with neither side wanting to lose, so it’s no surprise to see the bookies giving low odds of just 2.95 for it to end a stalemate on Saturday night.

There has been much talk about Wayne Rooney in recent weeks and whether he even deserves a place in the starting eleven. While the Manchester United forward hasn’t been on top form recently, let’s face it, Hodgson isn’t going to drop him and nor should he. On his day, Rooney is a world class talent and he’s capable of pulling a piece of magic out the hat when needed. England don’t have too many like him and I wouldn’t be surprised at all if he proves his critics wrong and has a good World Cup.

Rooney’s main problem is the emergence of Liverpool’s Daniel Sturridge and he’s now considered the ‘main man’ up front. This has seen Rooney forced to drop deeper or even out on the left, so it’s vital the United attacker works hard for the team and does his fair share of defensive work.

Sturridge on the other hand comes into the World Cup in fine form and I think he’ll prove to be England’s star this summer, and odds of 3.75 for him to be England’s top goal scorer at the tournament look tempting.

Sturridge is going to have an important role leading the line tomorrow and he has to keep the stubborn Italian defence on their toes. He should line-up alongside Liverpool team-mates Steven Gerrard and Raheem Sterling, and how this trio combine is going to be vital. Sterling is expected to start if Danny Welbeck isn’t passed fit, but I’d start him even if the United attacker is available. Sterling was excellent for Liverpool last season and his pace would be a real asset. Gerrard is the skipper and he needs to lead by example sitting in front of the defence, but his passing must be on point if England are going to find rhythm through the midfield area.

In defence, the main man is Gary Cahill and he’ll have to keep Mario Balotelli and/or Ciro Immobile quiet. Immobile has been deadly this past year and we all know Balotelli is capable of anything on his day, so whoever plays up front, Chelsea’s Cahill will be relied upon to keep them in check. 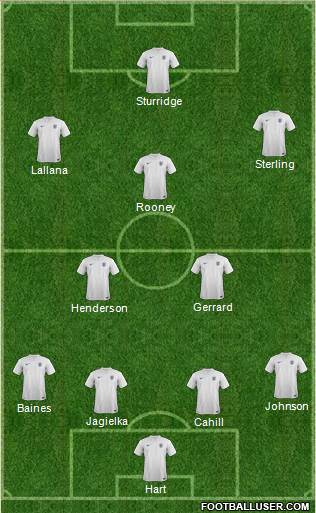 This is going to be a nervy, cautious game as both sides will not want to lose. I have a feeling both managers would take a draw before the game and will be set-up not to concede rather to to score. Therefore, our ‘banker’ bet would be under 2.5 goals which is currently on offer at bwin of odds of 1.42.

The only thing that could change the game is an early goal from a set piece as that would open the game up a little but I think the chances of an early breakthrough are remote so odds of 2.35 on 0-0 at half-time also seemed too tempting to pass up.

Overall, I think a low-scoring draw is the most likely result.

If there is to be a winner, it’s likely to be a 1-0 win, so our outside bet is to back Immobilie to score the winner for Italy in a 1-0 win and we’ve covered our backs by also betting on Sturridge to net the winner for England in a 1-0 win. These have long odds and we’ve only stuck a couple of quid on, but the returns will be high. Plus, bwin are currently offering double/treble chances on first goal-scorers so if either Immobilie or Sturridge score first and go on to score two or more goals, we’re quids in!