Arsenal have completed the signing of Alexis Sanchez from Barcelona on a long-term contract, the club have confirmed this evening. See him in his new shirt

The summer transfer window is now open for business and it’s expected to be a busy few weeks as managers strengthen their squads ahead of next season, so we’ll bring you all the latest news and gossip. Today, Arsenal complete a HUGE deal. 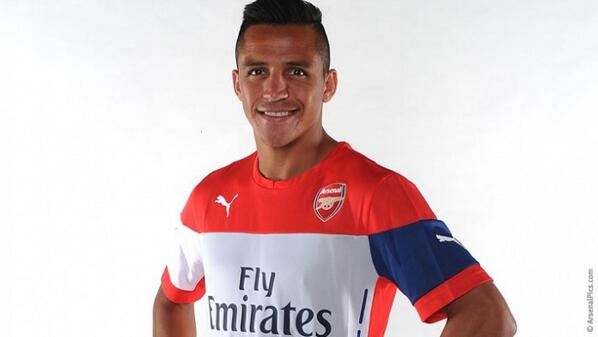 Arsenal have completed the sensational signing of Alexis Sanchez from Barcelona on a long-term contract, the club have confirmed this evening.

After weeks of speculation linking Sanchez with a move to the Emirates, a deal looked in the pipeline earlier this week after news broke that we had agreed a fee with Barcelona for the Chilean international.

Reports on Wednesday claimed that the 25-year-old had said his goodbyes to team-mates in Spain and he made his way to London early on Thursday to complete undergo his medical, and the club have now announced his signing ahead of tonight’s kit launch.

Chile international striker Alexis Sanchez has agreed to join Arsenal Football Club on a long-term contract for an undisclosed fee.

Understandably, fans are ecstatic at the signing as Sanchez is a genuine world class player who is going to be a major addition to our attack next season.

Arsenal haven’t officially announced the price we’ve paid Barcelona, but some reports suggest the deal will eventually be worth in the region of €45m (£35m) including various add ons.

After completing the deal, boss Arsene Wenger expressed his delight at the purchase and acknowledged that Sanchez will add power and creativity to our squad. He told the clubs website:

“As many people have seen during the World Cup this summer, Alexis is a fantastic footballer and we are delighted that he is joining us at Arsenal Football Club.

“Alexis will add power, creativity and much quality to our squad and we are all looking forward to him joining up with us in a few weeks. He has consistently produced top-quality performances at the highest level for a number of seasons now and we are all excited to see him integrate into the Arsenal squad. I’m sure all Arsenal supporters will join me in welcoming Alexis to our club.”

Sanchez also had his say on the move, praising Wenger and saying we have a fantastic group of players and he can’t wait to get going:

“I’m so happy to be joining Arsenal, a club which has a great manager, a fantastic squad of players, huge support around the world and a great stadium in London. I’m looking forward to meeting my new team-mates and to be playing for Arsenal in the Premier League and Champions League. I will give my best to Arsenal and want to make all the supporters happy.”

Sanchez will now have a well earned break before linking up with his new team mates at the end of the month and is expected to make his debut at the Emirates Cup in early August.

I’m sure I speak for all Gooners when I say welcome to Arsenal Alexis!