Lazar Markovic is on the verge of completing his £20m move to Liverpool after being snapped having an interview in a training kit after completing his medical.

The summer transfer window is now open for business and it’s expected to be a busy few weeks as managers strengthen their squads ahead of next season, so we’ll bring you all the latest news and gossip. Today, Lazar Markovic is close to joining Liverpool. 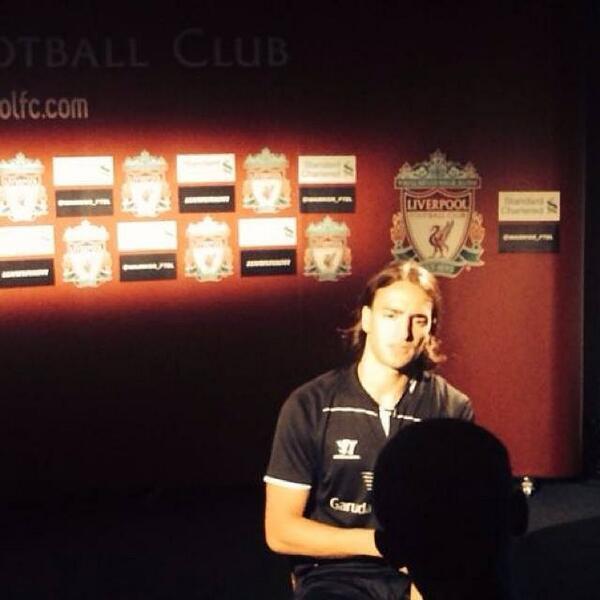 Lazar Markovic is on the verge of completing his £20m move to Liverpool after a picture was leaked online of him having an interview in an LFC training kit after completing his medical at Melwood on Monday.

The Serbian winger has been strongly linked with a move to Liverpool in recent weeks and speculation over the weekend suggested the 20-year-old was heading to Merseyside to finalise a move after the Reds had agreed a £20m with Benfica.

We soon saw images of the player at Lisbon airport and flying in a plane en route to England, and finally an image (below) leaked online on Monday morning showing the attacker arriving at Liverpool to rubber stamp his switch to Anfield.

The Liverpool Echo are reporting that the youngster has now undergone his medical and is expected to be officially revealed on Tuesday as Brendan Rodgers’ latest addition.

If that wasn’t evidence enough that Markovic is set to become a Red, a picture has now leaked of the player having his first interview as a Liverpool player in the clubs black training kit.

We await the official announcement on Tuesday, but everything looks wrapped up and Markovic is set to follow Adam Lallana, Rickie Lambert and Emre Can in moving to Liverpool this summer.