Liverpool have finally confirmed the signing of Croatian defender Dejan Lovren from Southampton for a fee believed to be in the region of £20million.

The summer transfer window is now open for business and it’s expected to be a busy few weeks as managers strengthen their squads ahead of next season, so we’ll bring you all the latest news and gossip. Today, Liverpool have confirmed the signing of Dejan Lovren. 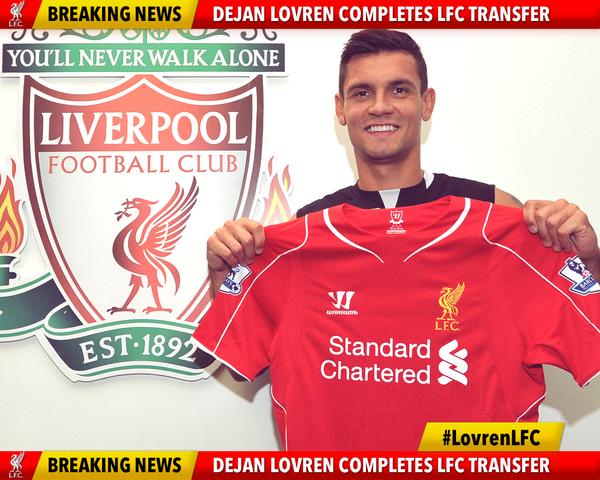 Liverpool have finally confirmed the signing of Croatian defender Dejan Lovren from Southampton for a fee believed to be in the region of £20million.

Lovren has been strongly linked with a move to Anfield all summer and the Reds were believed to have seen a bid turned down before the World Cup finals.

However, reports earlier this month claimed the 25-year-old had handed in a transfer request to try and push through the move and it did the trick as it emerged on Friday that Lovren was set to undergo a medical and discuss personal terms after a deal had been agreed between the two clubs.

Those formalities have now been completed as Liverpool have announced the signing on Liverpoolfc.com on Sunday night, confirming that the defender has signed a long-term deal with the club.

No official fee has been revealed, but talkSPORT claim the fee is in the region of £20m. After completing his move to Anfield, Lovren told the clubs website that it’s a dream come true and he can’t wait to play for the club.

“It’s a dream come true. I’m happy and glad to be here. I’m proud and can’t wait to start. I know we have millions and millions of supporters – Liverpool is more than a club.

“After I played at Anfield last season, I said to myself: ‘One day I hope I’ll be able to play here for Liverpool’. The fans will know from the first minute that I’m a player that will give 100 per cent on the pitch.”

The Croatian centre-back is the third player to make the move to Liverpool from Southampton this summer, with both Adam Lallana and Rickie Lambert making the switch to Merseyside last month.

It’s not clear if Lovren is now going to link-up with the rest of the squad over in the US on their pre-season tour, or stay back in Liverpool to train with his new club until the rest of the first team squad returns next week.

Here are some photos of Liverpool’s latest recruit posing with his new shirt, getting snapped with the Champions League trophy and standing in the Anfield boot room. All photos are from Liverpoolfc.com. 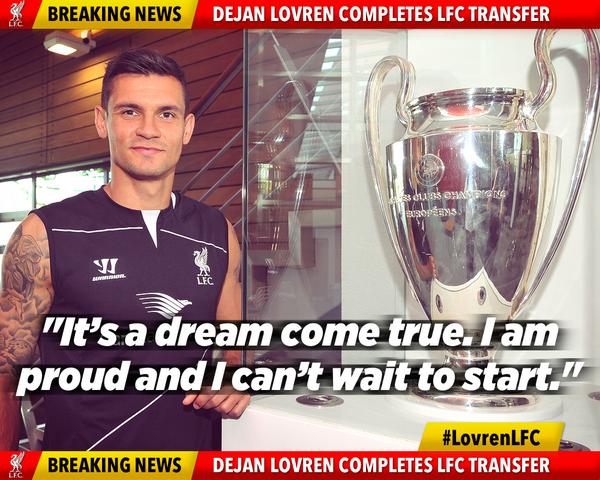