Liverpool have announced the signing of Javier Manquillo from Atletico Madrid on an initial two-year loan move this afternoon. See photos of him here.

ShareTweet
Prev1 of 5Next
Use your ← → (arrow) keys to browse

The summer transfer window is now well under way and managers are working hard to strengthen their squads ahead of next season, so we’ll bring you all the latest news and gossip. Today, Liverpool complete the loan signing of Javier Manquillo. 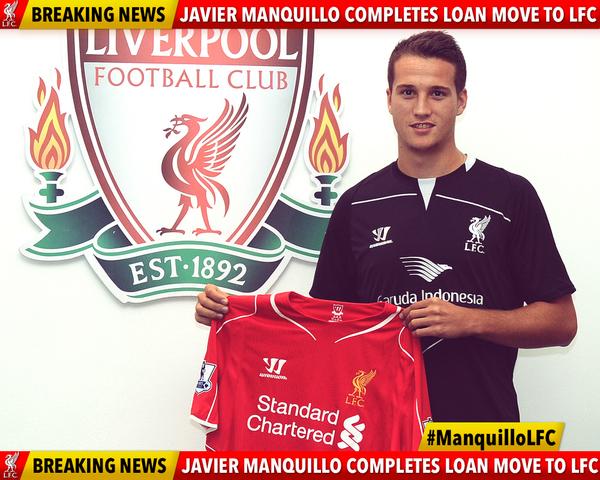 Liverpool have announced the signing of Javier Manquillo from Atletico Madrid on an initial two-year loan move this afternoon.

The Reds have been strongly linked with a move for the 20-year-old defender this summer and reports last month suggested that a deal had been agreed that would see the youngster move to Liverpool on a two-year loan with the option of making the deal permanent if things work out.

Further reports on Monday claimed that Manquillo was en route to the UK to complete his medical and thrash out personal terms, and it appears those formalities have now been completed as the transfer has been announced on Liverpoolfc.com this afternoon.

The Spanish youth international told the clubs website that he’s happy to have joined one of the biggest clubs in Europe:

“I’m very happy to have signed for a club like Liverpool. I think it’s one of the biggest in Europe. Any footballer would want to come and play here.

“When they tell you Liverpool want to sign you, I think like any player, you are going to be absolutely amazed and you don’t think of anything else than going straight there.

“It’s a team that nowadays, as I said before, any player would want to be a part of.”

Manquillo is predominantly a right-back and is now expected to challenge Glen Johnson for a place in Brendan Rodgers starting eleven next season. However, he’s also capable of playing in the middle of defence or even as a defensive-minded winger, so he’ll give the club plenty of options.

After coming through the youth ranks at Real Madrid, Manquillo joined rivals Atletico in 2007 but has struggled to get past Juanfran in Diego Simeone’s side, so he’s been forced out on loan to get some much-needed first team experience under his belt.

He now becomes Liverpool’s seventh new signing of the summer following the arrivals of Rickie Lambert, Adam Lallana, Emre Can, Lazar Markovic, Dejan Lovren and Divock Origi, and Rodgers is also understood to be in the market for a left-back and another forward. 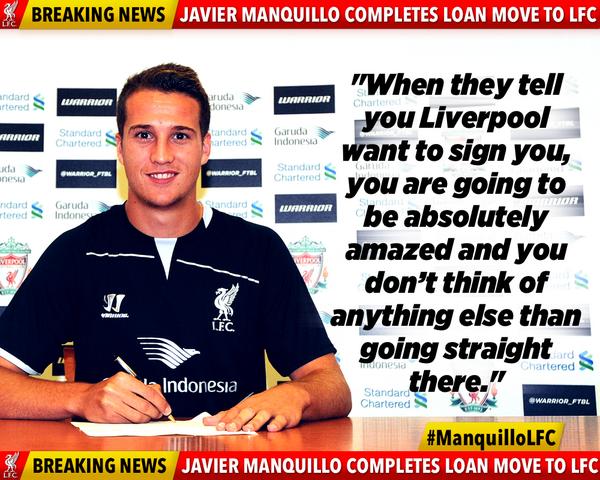