Arsenal open the new Premier League campaign with a home clash against Crystal Palace on Saturday evening. Here is Gooner Mac’s predicted team for the game.

Arsenal open the new Premier League campaign with a home clash against Crystal Palace on Saturday evening. Here is Gooner Mac’s predicted team for the game.

Goalkeeper: I’m not expecting any surprises between the sticks. David Ospina isn’t fit which means Wojciech Szczesny is a cert to start.

Defence: Arsene Wenger confirmed yesterday that Laurent Koscielny should be fit to play despite aggravating an Achilles injury, which is obviously a major boost. He’ll be partnered by young Calum Chambers as Per Mertesacker has only got a few days pre-season training under his belt. Mathieu Debuchy and Kieran Gibbs are likely to make up the back four.

Midfield: With no new defensive midfielder on board yet, Mikel Arteta is in line to start in front of the defence. The Spaniard will be joined by Aaron Ramsey and I wouldn’t be surprised if we saw Jack Wilshere also start with Mesut Ozil not available yet.

Attack: Alexis Sanchez is expected to make his competitive debut and I think he’ll be deployed on the right-wing with Olivier Giroud starting up front. We’ll need the Frenchman’s physicality and height against Palace, so despite his poor pre-season form, I see Arsene starting him. Santi Cazorla should make up the front three.

Here how the team could line-up: 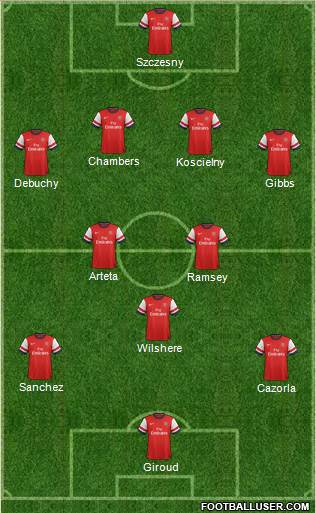 It’s a well balanced side and the additional pace and power of Sanchez should make a real difference while Theo Walcott is out. Alex Oxlade-Chamberlain and Tomas Rosicky will be the main options from the bench, while Yaya Sanogo and Joel Campbell have also played their way into the managers thoughts with some impressive outings in pre-season.

What do you think of the team? What side would you put out? Let me know your thoughts below…