Arsenal take on Besiktas in the first leg of their crucial Champions League play-off clash on Tuesday night. Here is Gooner Mac’s predicted line-up for the game

Arsenal take on Besiktas at the Ataturk Olympic Stadium in the first leg of their crucial Champions League play-off clash on Tuesday night. Here is Gooner Mac’s predicted line-up for the game.

Goalkeeper: David Ospina remains on the sidelines with a thigh injury so Wojciech Szczesny is certain to continue between the sticks.

Defence: Kieran Gibbs has been ruled out with a hamstring injury that he picked up early in the second half against Crystal Palace so Nacho Monreal will start at left-back tomorrow. Thankfully Laurent Koscielny trained with the squad this morning and was on the plane that left for Turkey earlier today so it looks like the Frenchman will continue to partner Calum Chambers in defence. He had been a doubt after aggravating an Achilles injury.

Midfield: Aaron Ramsey popped up once again with a crucial goal and I expect he’ll continue alongside Mikel Arteta against Besiktas. The Spaniard was steady and unspectacular last time out but until a ‘proper’ defensive midfielder is signed, he’s the best option we’ve got.

Attack: Jack Wilshere wasn’t at his best on Saturday so I can see him dropping out to allow Alex Oxlade-Chamberlain to come in to the attack. His pace gave us added impetus on Saturday so him and Sanchez should cause the hosts some problems tomorrow.

This would see Santi Cazorla move into a more central role with Mesut Ozil still not available, and I think Arsene will recall Olivier Giroud up front. Yaya Sanogo was pretty poor against Palace and Giroud showed his worth by winning the header that lead to the winning goal. In such a key game, we need to go with our best players.

Here’s how my team line-up: 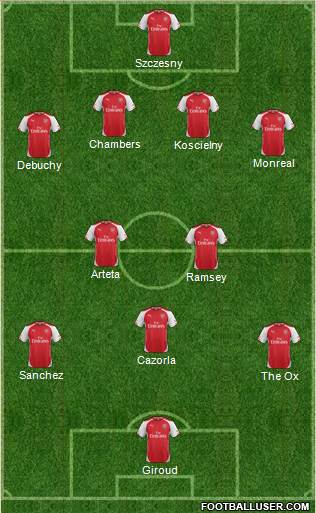 Playing away in Turkey will always be tricky but this team, even without our World Cup winning Germans, should be good enough to pick up a positive result tomorrow night.