Chelsea take on newly-promoted Leicester City at Stamford Bridge on Saturday. Here is the Football-Talk predicted starting eleven Jose Mourinho will go with. Chelsea take on newly-promoted Leicester City at Stamford Bridge on Saturday afternoon. Here is the starting eleven that Football-Talk predict Jose Mourinho will go with.

Goalkeeper: Mourinho made the huge call to drop long-serving goalkeeper Petr Cech in favour of highly-rated youngster Thibaut Courtois for Monday’s 3-1 win at Burnley and he’s unlikely to change his mind after just one game, so we should expect to see the Belgian keep goal once again this weekend.

Defence: While not underestimating the opposition, Mourinho might see this game as a good opportunity to hand summer signing Filipe Luis his debut, with Cesar Azpilicueta the man to drop out. Branslav Ivanovic showed his threat in the box once again with a goal on Monday so he’ll likely keep his place along-side the solid partnership of Gary Cahill and John Terry at the back.

Midfield: Cesc Fabregas enjoyed an excellent debut against Burnley, grabbing two assist, and despite the return from suspension of Ramires, there’s no reason for Mourinho to break up the exciting partnership of Fabregas and Matic just yet.

Attack: Andre Schurrle grabbed himself a superb goal last time out but the Blues boss might choose to hand him a rest following his World Cup exploits with Germany, which could see Willian come back in to the side along with Eden Hazard and Oscar. The trio could support Diego Costa in attack with the Spaniard expected to keep his place after scoring on his debut last time out. 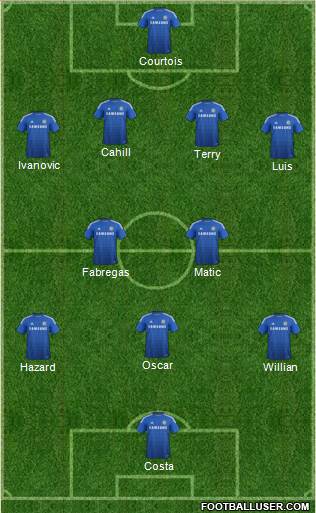 What do you think of the team? What side would you select for the game?