Louis van Gaal takes his injury-hit Man Utd squad to the Stadium of Light on Sunday afternoon to take on Sunderland. Here is our predicted line-up for the game:

Louis van Gaal takes his injury-hit Manchester United squad to the Stadium of Light on Sunday afternoon to take on Sunderland. Here is our predicted line-up for the game:

Goalkeeper: No change required here. As long as he’s fit, which he currently is, David De Gea will start in goal.

Defence: United continue to be without Jonny Evans due to injury while new signing Marcos Rojo is ineligible as he hasn’t received his work permit yet, so van Gaal has limited options at the back. Therefore, the Dutchman is probably going to have to go with the same back three that faced Swansea.

Midfield: Antonio Valencia is expected to be available again so he’s likely to start in the right wing-back role. Jesse Lingard, Marouane Fellaini, Michael Carrick were joined by Ander Herrera on the sidelines after the Spaniard picked up an ankle injury in training on Thursday.

This leaves van Gaal with few options to choose from in the middle of the park so Tom Cleverley may be drafted in to start alongside Darren Fletcher. With Luke Shaw also still out, Ashley Young may keep his place on the left wing.

Attack: Thankfully van Gaal has fewer worries in attack as Robin van Persie is available again having missed last weeks win at Swansea due to a lack of match fitness. The Dutchman should replace Javier Hernandez up front with Wayne Rooney and Juan Mata keeping their places in the starting eleven.

Here’s how van Gaal may line-up this weekend: 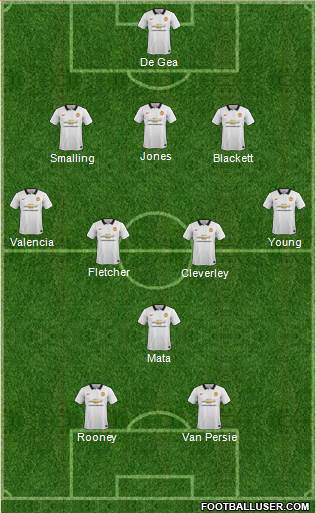 What do you think of the team? What eleven would you pick?