Sanogo In, The Ox Out: Predicted Arsenal Starting XI To Face Besiktas

Arsenal face Besiktas tomorrow night with a place in the group stages of the Champions League at stake. Here is Gooner Mac’s predicted starting eleven. Arsenal face a huge game against Besiktas at the Emirates tomorrow night with a place in the group stages of the Champions League at stake. Here is Gooner Mac’s predicted starting eleven for the match:

Goalkeeper: David Ospina is still at least a week away from fitness but Wojciech Szczesny will start in goal regardless.

Defence: Laurent Koscielny was left out against Everton on Saturday to protect his troublesome Achilles injury and I think we’ll see him return to the team tomorrow. Arsene won’t take any chances as he knows how much is riding on this match, so I’m sure we’ll see Per Mertesacker also start alongside the Frenchman. Kieran Gibbs is still out so Nacho Monreal will continue at left-back.

Midfield: We have some problems in the middle of the park as Aaron Ramsey is suspended and Mikel Arteta is out injured, so it’s likely we’ll see Matheiu Flamini joined by Jack Wilshere in midfield.

Attack: Alexis Sanchez didn’t work through the middle at the weekend so he’s likely to revert back to right wing with Mesut Ozil back playing centrally in the ‘hole’. Santi Cazorla didn’t start against Everton so he should come back in with The Ox the unlucky one to drop out.  Tomas Rosicky is also pushing for a recall but he’ll most likely be among the subs.

Striker: Olivier Giroud is certain to miss the game and could be facing an extended spell on the sidelines with an ankle injury. We have few options to call upon so if Arsene does start Sanchez on the right I think we’ll see Yaya Sanogo up top as we need a physical presence to work off. 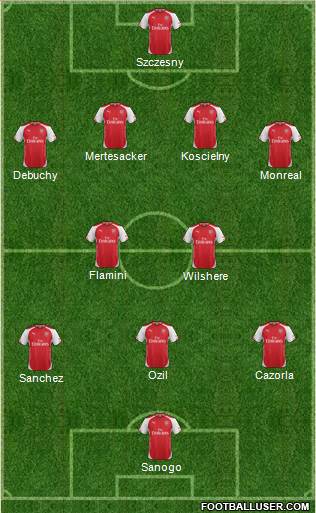 What do you think of the team? What eleven would you put out?