Chelsea will look to maintain their 100% start when they take on Everton at Goodison Park on Saturday evening. Here is the team I think Jose Mourinho go with:

Chelsea will look to maintain their 100% start to the new season when they take on Everton at Goodison Park on Saturday evening. Here is the team I think Jose Mourinho go with:

Goalkeeper: Mourinho has made the brave decision to drop Petr Cech in favour of youngster Thibaut Courtois and the Belgian has done nothing to suggest he’ll be left out for this game.

Defence: Mourinho likes a settled back-four and the combination of Ivanovic, Cahill, Terry and Azpilicueta was his first choice quartet last season, and has continued to be his preferred option this campaign. Filipe Luis is pushing to start on the left, but I think we’ll see Jose go with his tried and tested back four once again.

Midfield: Cesc Fabregas has settled in well following his move from Barcelona and he’s forming an excellent partnership with Nemanja Matic, so there’s no reason to break the duo up this weekend.

Attack: The big problem for Mourinho is that Diego Costa looks set to miss out with a hamstring strain so Didier Drogba is expected to start up front, with Fernando Torres in talks over a loan switch to AC Milan. Willian could come in for Andre Schurrle in attack, but I think we’ll see Jose stick with the German along with Eden Hazard and Oscar. 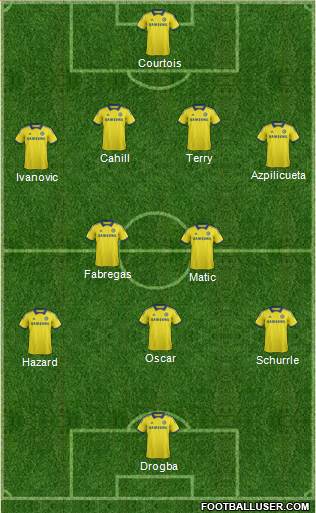 What do you think of the team? What side would you go with?