Arsenal take on champions Manchester City at the Emirates Stadium on Saturday lunchtime. Here, Gooner Mac brings us his predicted starting XI for the game.

Arsenal take on champions Manchester City at the Emirates Stadium on Saturday lunchtime. Here, Gooner Mac brings us his predicted starting XI for the game.

Goalkeeper: David Ospina is fit and will be in the squad but Arsene Wenger is expected to stick with No.1 Wojciech Szczesny.

Defence: Kieran Gibbs is also fit after recovering from a hamstring strain so he should come in for Nacho Monreal at left-back. Laurent Koscielny is available despite being forced off with a head injury against Leicester last time out.

Midfield: Wenger confirmed earlier today that Mikel Arteta will return to the squad after shaking off an ankle injury that’s ruled him out for the past three weeks, so Mathieu Flamini is likely to make way.

Aaron Ramsey will face a late fitness test on an ankle injury he picked up playing for Wales in midweek. Arsene says he has a ‘little chance’ to be fit, which doesn’t sound very optimistic, so I expect the best we can hope for is a sub appearance.

Attack: Mesut Ozil is fit despite pulling out of the Germany squad with an ankle knock so I’d expect him to line-up along with Santi Cazorla and Alexis Sanchez in attack with the trio playing behind new signing Danny Welbeck.

The boss has already confirmed he sees the 23-year-old as a striker so hopefully he’ll throw him straight into the action this weekend as Welbeck will be keen to impress after his exploits for England in midweek. 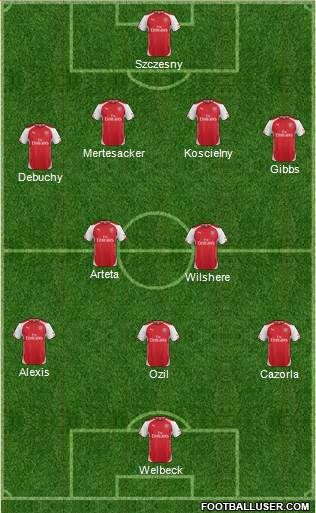 What do you think of the team? How would you line-up this weekend?