Chelsea striker Diego Costa has been named as the Barclays Player of the Month for August, it was confirmed on Friday morning. See him posing with his award 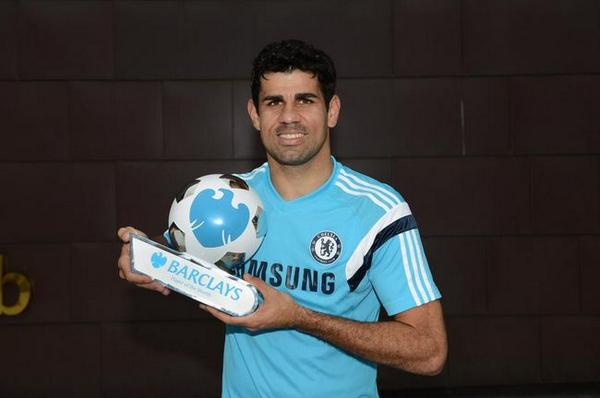 Chelsea striker Diego Costa has been named as the Barclays Player of the Month for August, it was confirmed on Friday morning.

The Spanish striker only moved to Stamford Bridge this summer after completing a £32m move from Atletico Madrid following four seasons at the Vicente Calderon.

However, he hasn’t taken long to acclimatise to life in England as the 25-year-old has found the net four times in three games to help Chelsea to the top of the Premier League table.

Costa didn’t take long to open his account for the Blues after scoring just 17 minutes into his debut against Burnley and he followed that up with another strike against Leicester a week later.

The Spanish international then put in a devastating display during Chelsea’s thrilling 6-3 victory over Everton before the international break, with the striker bagging a brace to ensure Jose Mourinho’s men continued their 100% start to the new season.

‘I’m very happy to win this award. It is important to begin well at a new club and I’m pleased with both my start to the season and also the team’s, which is the most important thing.

‘I hope to continue scoring goals to help out the team and keep making our fantastic supporters happy. I thank my team-mates as they have helped me win this award.’

Chelsea fans will be hoping Costa is passed fit to face Swansea City this weekend to give him the opportunity to continue his excellent start to his career in West London.