Here’s a full injury update from Manchester United boss Louis van Gaal ahead of their game with Queens Park Rangers at Old Trafford on Sunday afternoon. 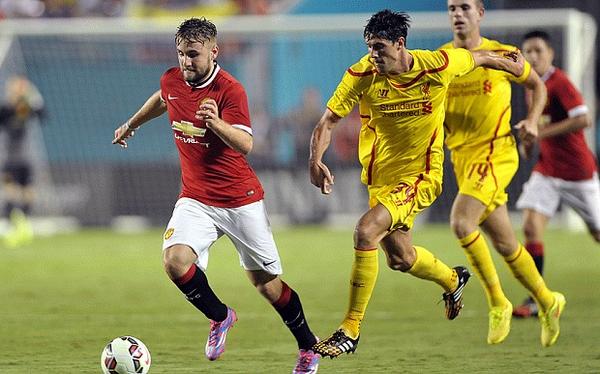 Manchester United will look to kick start their season when they entertain Queens Park Rangers at Old Trafford on Sunday afternoon.

Ahead of the game, boss Louis van Gaal has been speaking at his pre-match press conference this afternoon and gave ManUtd.com a team news and injury update.

The good news is that summer signing Luke Shaw is back in the squad and set to make his competitive debut after recovering from a hamstring strain, but van Gaal warned the young defender isn’t fit enough to complete the full ninety minutes yet.

Ander Herrera and Rafael are also back in contention however, the rest of the injury situation is dire for United with van Gaal confirming that nine players are still unavailable.

The big injury news is that Phil Jones is facing up to a month on the sidelines after picking up a hamstring injury while away with England this week, so Marcos Rojo is likely to come in and make his debut after receiving his work permit.

Jones joins the likes of Marouane Fellaini, Ashley Young, Chris Smalling, Sam Johnstone, James Wilson, Reece James and Jesse Lingard on the sidelines but there was some good news on Michael Carrick with van Gaal confirming the midfielder is back running earlier than expected as he continues to recover from an ankle injury.

“When I left for the international break it was 10 [players injured] so only one is back – Shaw.

“Shaw is fit enough to play but not the whole game – there is a difference. [Marouane] Fellaini is longer than a month and [Phil] Jones is maybe three weeks or a month.

“[Michael] Carrick is not ready but he has run for the first time on grass, which is unbelievable after eight weeks. [Sam] Johnstone has elbow problems, [Chris] Smalling is not fit enough but he shall train tomorrow with the second-team squad for the first time.

“[James] Wilson is not ready yet, [Reece] James is not ready, and [Jesse] Lingard and [Ashley] Young are also injured.”

Obviously it’s far from ideal for van Gaal to be without nine squad players and they looks extremely short at the back now that Jones is out. However, there is still going to be a lot of buzz around Old Trafford this weekend as Radamel Falcao, Daley Blind and Luke Shaw all get set to make their full debuts for the club.