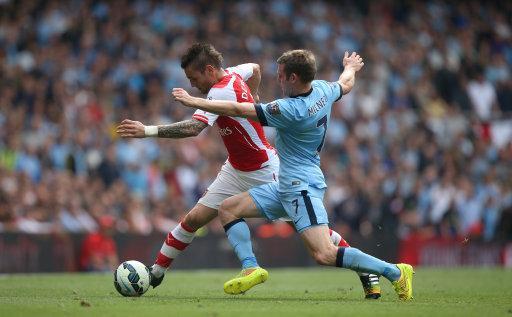 Debuchy was forced off during the closing stages of Arsenal’s 2-2 draw with Manchester City this afternoon after going doing clutching his leg with no other players in close proximity.

Fans were fearing the worst as the Frenchman was given lengthy treatment on the pitch, including being given oxygen to help numb the pain, before being taken off on a stretcher.

Supporters speculated on social media whether he’d broken his leg or perhaps snapped his Achilles, but thankfully it looks like the injury is a lot less serious than that.

Speaking at his post-match press conference, Arsene has confirmed that Debuhcy has a badly sprained ankle but he isn’t sure how long the defender will be out for. He told reporters:

“Debuchy has a bad ankle sprain. I don’t know how long he will be out for but it doesn’t look too good”

There were also concerns over the fitness of new signing Danny Welbeck after he limped off 5 minutes from full time with what appeared to be a calf problem.

However, Arsene has eased those fears after confirming the 23-year-old was simply suffering from cramp and didn’t pick up any sort of injury. The boss continued:

“Welbeck had cramps but he should be OK. He did well but needs to develop his link play. He looked dangerous”

It’s a big blow to lose Debuchy so hopefully his injury isn’t as bad as first thought and he won’t be on the sidelines for too long. In his absence we’re going to have to rely on Calum Chambers or Hector Bellerin at right-back and pray we don’t suffer any more injuries at the back.