Arsenal drew 2-2 with champions Manchester City in a thrilling game at the Emirates on Saturday afternoon. Here are player ratings from Gooner Mac. 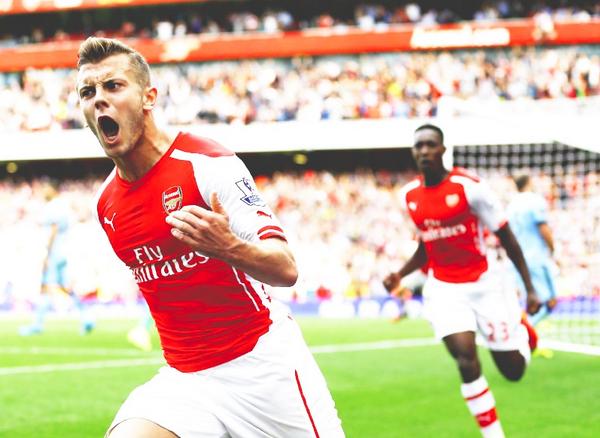 Arsenal drew 2-2 with Manchester City in a thrilling game at the Emirates on Saturday afternoon. Here are player ratings from Gooner Mac.

Szczesny 7/10 | The Polish international had a mixed day. On the one hand he made a couple of excellent saves, including a last gasp effort to deny Dzeko a winner, but he’ll feel he should have done better with the Demichelis header.

Debuchy 7/10 | Another adventurous display down the right before the Frenchman was forced off with what looks like a bad ankle injury.

Mertesacker 6/10 | Looked a little off the pace at times and went missing for the opening goal.

Koscielny 7.5/10 | Excellent display from Kos. He was on hand to make a number of interceptions and clearances.

Monreal 6/10 | Struggled at times against the pacey Navas and he always looks to jump into a tackle, which predictably gets him in the referees book.

Flamini 5.5/10 | A solid start was ruined when he allowed Aguero to run off him to fire home the opening goal. Just doesn’t offer enough in the defensive midfield area, particularly against the tougher teams.

Wilshere 8.5/10 | Outstanding performance from Jack. His goal was superb and he also set up Sanchez for the second. He was taking people on, making tackles and we saw plenty of his trademark one-two’s. One of his best displays for a long time.

Ramsey 6/10 | Disappointing from Ramsey overall. He did set up Wilshere for his goal but missed a glorious chance to make it 3-1 and wrap up the three points.

Ozil 6.5/10 | Very sloppy at times and you can tell he’s not comfortable playing out wide. He drifted into the middle later on and looked far more of a threat.

Sanchez 8/10 | Put us ahead with a stunning volley and worked his socks off. His work ethic is unbelievable and he’s got the quality to match it.

Welbeck 7/10 | Encouraging debut. Was unfortunate not to open his account in the first half when he hit the post. Was less involved after the break before being forced off with cramp.

Chambers 6/10 | On for Debuchy and didn’t put a foot wrong. Looks likely to be in the side for a while now.

A draw isn’t a terrible result against the champions but we really need to start putting three points on the board soon. Next up is Borussia Dortmund away in the Champions League before taking on Aston Villa next weekend.