Arsenal were held to a 2-2 draw by Manchester City at the Emirates on Saturday afternoon. Here, Gunner333 gives us his 4 talking points from the game.

Arsenal were held to a 2-2 draw by Manchester City at the Emirates on Saturday afternoon. Here, Gunner333 gives us his 4 talking points from the game. 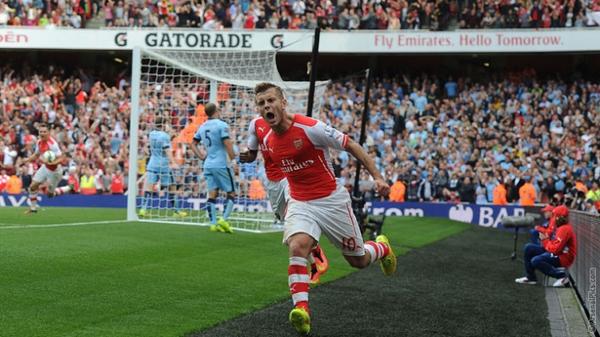 After successive draws away to Everton and Leicester, Arsenal hoped to get back to winning ways against Manuel Pellegrini’s Man City side at the Emirates having already beaten the champions 3-0 in the Community Shield last month.

After Danny Welbeck went close to opening the scoring on his debut, City hit Arsenal on the break with Jesus Navas setting up Sergio Aguero who made no mistake at the near post for 0-1. Jack Wilshere inspired the comeback as the England midfielder combined beautifully with Aaron Ramsey before firing past Joe Hart to level things up at 1-1 midway through the second half.

Alexis Sanchez then continued his fine goal-scoring form to put Arsenal ahead for the first time in the game with a stunning volley. However, our inability to defend set pieces came back to haunt us once more as Martin Demichelis was left free in the box to head home the equaliser in the 83rd minute.

Despite Pelligrini’s ungracious complaints about both of Arsenal’s goals supposedly coming from fouls in the build-up, the scoreline remained 2-2, with Arsenal racking up their 3rd consecutive draw of the league season.

Here I will now analyse four talking points from the game, reflecting on both the good and improvable of Arsenal’s play.

The story may have been different if the Etihad were the venue for this clash, as Manchester City saw very little of the ball with Arsenal having the lions share of possession. It was a greatly contrasting approach to many of our performances against the Big Guns in recent seasons, with the players looking energetic and confident from the off which saw us pressing well all over the pitch.

The likes of Fernandinho and Frank Lampard had their pockets picked many a time by the Wilshere-Ramsey combination and we pressed exceptionally well down the flanks too [although this approach does supply some negatives; of which will be examined further on]. The 12:45pm kick-off time didn’t shake us up either like last season and this improved performance against a title rival should give us confidence for the season ahead.

One thing Arsenal have lacked in recent seasons is the ‘something-out-of-nothing’ that can be generated by either luck or, in our case this season, a world-beater. Although not influential throughout the full ninety minutes, Alexis Sanchez stamped his name on the game with a  sensational strike.

His finish was a simple exhibition of flare, technique and plain audacity. Who knows how the game would have gone without this wonder strike? Few players would have had the confidence to take it on the volley, but those that do also need to have the ability to pull it off. The Chilean’s work rate was breathtaking, and he set an example for his team-mates with his desire to win the ball back and make things happen.

What To Work On

As previously mentioned, I feel the commitment of our full-backs when going forwards can often supply our forward line with further width, that we lack from our wide midfielders, who tend to prefer drifting in through the middle. However, these extravagant bursts can often lead to frailties at the back, especially from counter-attacks.

In the opening stages, Jesus Navas found space vacated by our full-backs and in the end it cost us as Monreal was caught too far up-field which resulted in City’s opening goal. It was not solely Monreal’s fault though, as Flamini didn’t track Aguero’s run. Ideally we’d have a defensive midfielder who’s capable of covering the full-back areas when they do venture forward, but neither Flamini nor Arteta are capable of this, particularly against the bigger teams.

A goal at the death from a set piece…how often have we heard that before, eh? Yesterday we blew our lead in typical Arsenal fashion, with some very poor marking and lack of strength in the air. There is little doubt we have problems at the back when defending set pieces and it’s not just down to a lack of height in the team. Our set-up is all wrong and there doesn’t seem to be anyone shouting the orders to organise the players.

Since Steve Bould arrived at the Emirates to assist Wenger, his defensive knowledge has paid dividends but, compared to last year, we seem to be slipping on these standards, with 4 headed goals already being conceded in our opening four games. This needs sorted out quickly.