Arsenal have been dealt yet another injury blow with Nacho Monreal missing the trip to Germany to face Borussia Dortmund on Tuesday, according to the Telegraph. 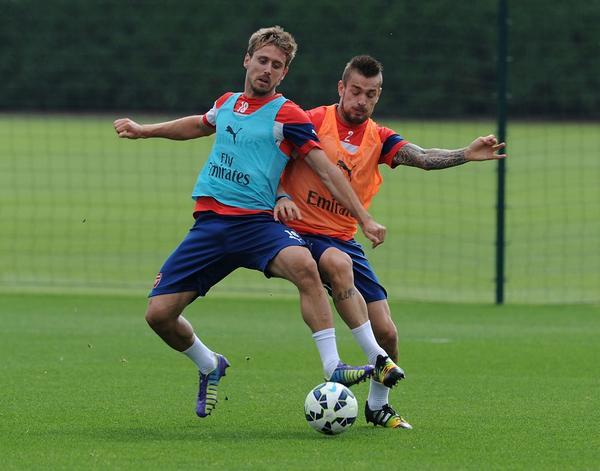 Arsenal have been dealt yet another injury blow with Nacho Monreal missing the trip to Germany to face Borussia Dortmund on Tuesday night, according to the Telegraph.

The squad has just flown out to Germany ahead of tomorrow’s Group D opener and the newspaper claims that Monreal wasn’t on the flight after picking up a knock.

The Spaniard is believed to have sat out training this morning with an unspecified injury and although it’s not thought to be serious, the Telegraph say it’s enough to keep the defender out of tomorrow’s game.

The news comes just hours after reports claimed that Mathieu Debuchy is set to miss at least two months with an ankle ligament injury he suffered during the second half of Saturday’s 2-2 draw with Manchester City, and with the duo on the sidelines, it leaves us extremely short of cover at the back.

Calum Chambers is expected to replace Debuchy at right-back against Dortmund and with Monreal now also out, Kieran Gibbs will almost certainly return at left-back having only just recovered from a hamstring injury.

This leaves us with just Hector Bellerin and Isaac Hayden as cover in defence, which is a worrying situation as we head into a busy time of the season that sees us play in three competitions.

Arsene Wenger’s decision not to strengthen our defence already looks to have caught up with us. If we suffer another serious injury to the likes of Per Mertesacker or Laurent Koscielny over the next couple of weeks, our season could be over before it’s even began….