Arsenal have been handed a triple injury boost ahead of this weekends trip to Aston Villa with Wilshere, Chambers and Monreal all be in contention for the game. 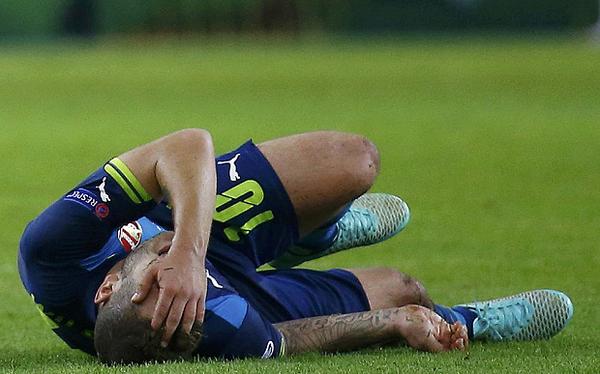 Arsenal appear to have been handed a triple injury boost ahead of this weekends trip to Aston Villa with reports claiming that Jack Wilshere, Calum Chambers and Nacho Monreal will all be in contention for the game.

Arsene Wenger confirmed shortly after our 2-0 loss to Borussia Dortmund on Tuesday night that Wilshere has turned his ankle during the closing stages of the game.

Although the boss didn’t think the injury was serious, he was left sweating on the results of a scan and was being cautious due to the midfielders previous history with his troublesome ankles – which kept him out for over 16 months.

However, the Times newspaper are reporting that scan results show Wilshere has suffered only minor bruising and will be cleared to return to full training on Friday. As long as the midfielder doesn’t suffer any reaction or discomfort, then the 22-year-old will be available to face in-form Aston Villa at Villa Park on Saturday afternoon.

I’m sure Arsene won’t take any unnecessary risks given Wilshere’s previous ankle problems, but it will be a huge boost if he is available as we desperately need to get back to winning ways this weekend and Jack is arguably our only midfielder in any sort of form right now.

There was further good news with the newspaper claiming that both Chambers and Monreal will also return to full training and be in contention to face Villa. Chambers was only deemed fit enough for a place on the bench on Tuesday due to a bout of tonsillitis but he should shake it off in time to come in for Hector Bellerin at right-back this weekend.

Monreal missed the trip to Germany in midweek with a minor back complaint and his return will give us some much needed depth at the back, as we only had three fit senior defenders on Tuesday night, so at least we’ll have some options on the bench against Villa.