Arsenal got back to winning ways this weekend as they cruised to a 3-0 win over Aston Villa. Here, Gunner333 gives us his four talking points from the game.

Arsenal got back to winning ways this weekend as they cruised to a 3-0 win over Aston Villa at Villa Park. Here, Gunner333 gives us his four talking points from the game. 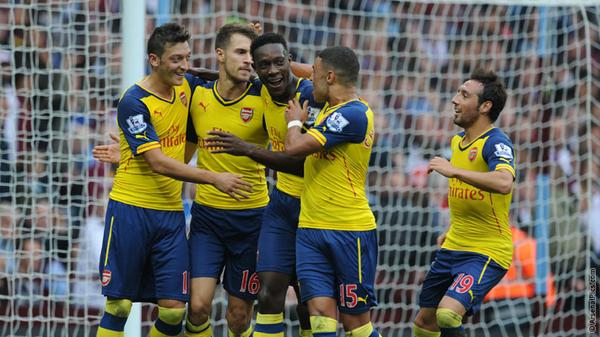 Two of this seasons last remaining unbeaten teams went head-to-head at Villa Park on Saturday afternoon with Arsenal trying to get back on track after three consecutive draws in the Premier League. Whilst Jack Wilshere was benched, Calum Chambers returned and Wenger opted to remain with Danny Welbeck to spearhead the Arsenal attack.

Lambert’s side executed their game plan from the off, with quick counters from Arsenal break-downs the key to finding space.  After masses of Arsenal pressure in the opening stages, Villa finally looked to consolidate, but perhaps too late. The hosts were warned by a dragged Aaron Ramsey shot, moments before a trio of Arsenal conversions would flourish.

Danny Welbeck sought some worth, finding Mesut Özil clean-through, the German comfortably dispatching. The former-Madrid man repaid the favour moments later, his cross finding the Englishman, who side-footed home his first for the Gunners to end a goal-drought beckoning since March. The action resumed for a second time, as Kieran Gibbs advanced before unleashing a strike, which Aly Cissokho managed to bundle into his own net. The scoreline remained 3-0 until the final whistle, and I’ll now discuss my four talking points from the game.

Potentially for the first time this season, Mesut Özil really exhibited himself as a master of the game. Converting first, before setting up Welbeck, this is the kind of spontaneity that warranted such a hefty price-tag, just over a year ago.

Wenger opted to start the German more centrally behind Welbeck and it paid dividends as the pair linked-up superbly throughout the game, resulting in two goals in just two first half minutes. While his main position was central, Ozil did drift out wide as he found pockets of space, and he’s only allowed that kind of freedom when deployed in the No.10 role without the burden of tracking adventurous full-backs.

His final ball looked more incisive and he played with greater confidence, and this is the Ozil fans have been waiting to see as he orchestrated the victory. Let’s hope this is a sign of things to come from him.

Attack is the best form of defence, and we exhibited this well on Saturday as we dominated possession for long spells. This not only denied Villa the opportunity to create attacks, but they also appeared to tire as they chased shadows for much of the game. Our defence has looked a touch shaky in the opening fixtures this season, with this our first clean-sheet, but I thought we looked far more solid at the back at Villa Park. Chambers was solid at right-back and as he’s far  less adventurous than the likes of Debuchy, there was less space for Villa to exploit on counter-attacks.

The ongoing debate about the make-up of Arsenal’s midfield continues and while Arsene is going to find it increasingly difficult to squeeze both Aaron Ramsey and Jack Wilshere into the team while keeping Ozil as a No.10, the big issue for me remains Mikel Arteta. The Spaniard put in a much-improved display on Saturday compared to Dortmund away, and his 97% pass completion rate was impressive.

However, he still lacks the pace and physicality we desperately need in the center of the park and this is going to continue to be a problem until we address it by bringing in a dominant midfielder to compliment the attacking talents of Cazorla, Wilshere, Ramsey and Ozil.

Unbeaten in all league matches since April we may be, our away form of late has especially surprised me. A duo of draws with Everton and Leicester had some fans writing our title hopes already, but I think we have showed great character on the road this season.

We battled back from two-down to claim a point at Goodison Park before earning another well-earned draw at Leicester – who have already shown they are going to be a match for anyone in front of their passionate home crowd. Obviously this game was by far our best performance away from home this season but the key is to take this kind of form into the big games and get some confidence-boosting results against our direct rivals both in the league and in Europe.