Liverpool will be looking to get their season back on track when they take on Middlesbrough in the third round of the Capital One Cup tonight. Here’s a preview

Liverpool will be looking to get their season back on track when they take on Middlesbrough at Anfield in the third round of the Capital One Cup tonight.

The Reds have made a poor start to the new season and lost their third Premier League game with a 3-1 loss away to West Ham on Saturday night, so boss Brendan Rodgers will be desperate to bounce straight back against Boro this evening.

This will see Brad Jones make a rare start in goal while Mamadou Sakho, Kolo Toure and Jose Enrique should offer some experience in defence.

Jordan Henderson is struggling with a hip injury and although he’ll be assessed ahead of the game, Rodgers is unlikely to take any risks so Suso could be given a chance to impress.

Striker Rickie Lambert is set to make his debut for Liverpool after completing a move from Southampton in the summer, and he should be joined by Lazar Markovic and Fabio Borini in attack.

Middlesbrough will be without Dean Whitehead following his sending off against Brentford on Saturday, but defender Daniel Ayala is available after completing his ban. 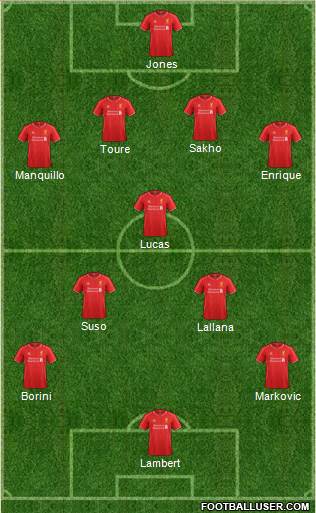 Rickie Lambert: It’s a huge night for the striker as he fulfills a life-long dream of starting for Liverpool at the age of 32-years-old. He’s going to have to be the focal point for the Reds attack and offer a real goal threat with Sturridge, Sterling and Balotelli not in the side.

Liverpool 2-1 Middlesbrough: Liverpool should still have too much for the Championship outfit in the end, despite Rodgers making wholesale changes to his starting eleven.