Tottenham Hotspur welcome Nottingham Forest to White Hart Lane on Wednesday night in the third round of the Capital One Cup. Here is the team news and line-up

Tottenham Hotspur welcome Nottingham Forest to White Hart Lane on Wednesday night in the third round of the Capital One Cup.

Ahead of the game, boss Mauricio Pochettino has given the clubs website a team news and injury update and confirmed that winger Andros Townsend is back in contention after recovering from a dead leg that he picked up against Partizan Belgrade last week.

The England international subsequently missed Sunday’s disappointing 1-0 loss at home to West Brom but Pochettino has revealed that the attacker is now fully fit and in contention along with the rest of his squad.

“Andros is fully fit and maybe has an opportunity to play. Everyone else is okay, the squad is fit.”

The only player on the sidelines is long-term injury victim Kyle Walker, who continues to nurse a troublesome hip injury. His stand-in so far this season has been Eric Dier so the youngster is likely to be rested with Kyle Naughton coming in at right-back.

This will give some of the fringe players a chance to impress with Fazio and Ben Davies expected to come in to the defence along with Jan Vertonghen, while summer signing Benjamin Stambouli should also start in midfield.

Aaron Lennon and Harry Kane could also get run-outs along with the fit-again Townsend, while Roberto Soldado is expected to start up front.

Here’s the team Pochettino could go with: 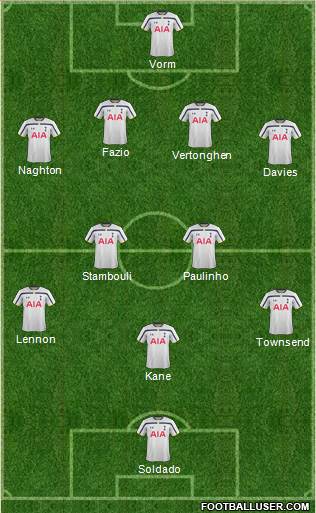