Arsenal lost 2-1 defeat to Southampton in the Capital One Cup after goals from Tadic and Clyne cancelled out a free-kick from Alexis Sanchez. Here are ratings 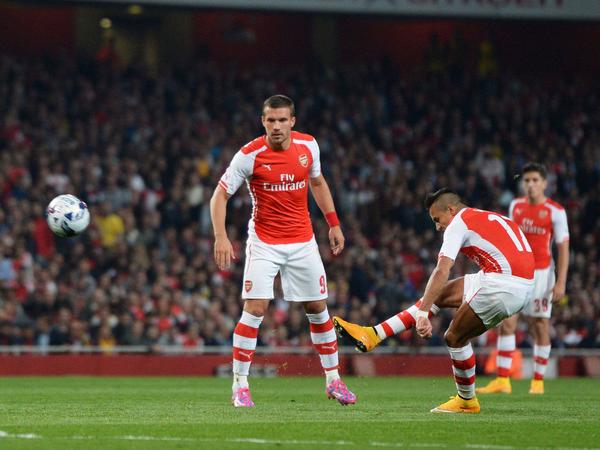 Arsenal slumped to a disappointing 2-1 defeat to Southampton in the Capital One Cup tonight after goals from Tadic and a stunner from Clyne cancelled out an excellent free-kick from Alexis Sanchez.

Ospina 6/10 | Made a decent early stop to deny Davies and did well to keep a powerful free kick from Tadic out, but could he have done better with the Clyne goal? It was certainly hit like a rocket but I think he should have done more to keep it out.

Bellerin 6/10 | Given the run-around at times by the impressive Tadic. Always keen to get forward and he did put in a few dangerous crosses.

Hayden 7/10 | Did very well on his debut. The youngster looked calm and composed and showed Arsene Wenger he can be replied upon as a fourth choice centre-back.

Chambers 6.5/10 | Back at centre-back and did little wrong. Kept hold of Pelle reasonably well but will be disappointed to lose out to his former side.

Coquelin 6.5/10 | Solid display at left-back from the Frenchman. Showed his versatility.

Wilshere 6.5/10 | Was involved in some neat exchanges but wasn’t really to be his night.

Diaby 6.5/10 | The forgotten man returned after an 18 month absence and showed some classy touches at times. Could be a useful player if he can stay fit.

Rosicky 5/10 | Will be disappointed to have given away the penalty and looked well short of match fitness. Lost possession on far too many occasions.

Campbell 5.5/10 | Showed his immaturity at times by making the wrong decision but he was always keen to impress. Perhaps tried a little too hard at times.

Podolski 4/10 | Completely anonymous. Such a poor display from a player who has the ability to offer so much. He barely looked interested and I’m sure Arsene will not have been impressed at all.

Sanchez 8/10 | A real shining light on a dark night. He just never gives up and has the ability to match. The free-kick was stunning and he could have added another but was denied by Forster from close range.

Cazorla 6.5/10 | Added some urgency to the attack but couldn’t find a way through.

The Ox 6/10 | Added some pace down the right but failed to create much.

A disappointing result but the biggest worry was how poor the likes of Podolski and Rosicky were. Two players who are meant to be pushing for the first team. They won’t get near it again in a hurry if this is the kind of form they show.