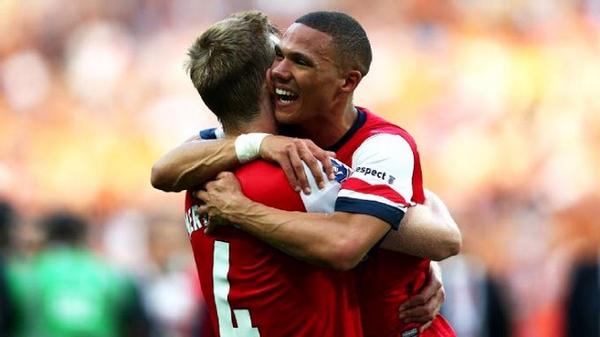 Arsenal will be looking to bounce back from Tuesday defeat when we take on North London rivals Tottenham Hotspur at the Emirates on Saturday evening.

Ahead of the game, boss Arsene Wenger has been speaking to the media at his pre-match press conference this morning and gave Arsenal.com a team news and injury update.

The Frenchman revealed that Per Mertesacker had a gluteus problem earlier this week which saw him only named among the substitutes to face Southampton in the League Cup, but he’s due to take part in full training today and is expected to be passed fit to face Spurs tomorrow.

There is positive news on Mathieu Flamini with the midfielder also passed fit to return to the squad after missing the last two games with a dead leg, but it remains to be seen whether he’ll be recalled or if the boss will go with Mikel Arteta in the center of the park.

Wenger has also confirmed that Kieran Gibbs is fit after he too picked up a knock earlier this week and the 25-year-old will start at left-back with Nacho Monreal still nursing a back injury that plagued him in recent weeks.

The Spaniard therefore joins the likes of Olivier Giroud, Mathieu Debuchy and Theo Walcott on the sidelines, with Theo still working his way back to full fitness after almost 9 months out with a knee injury.

Flamini is back in the squad and the long-term injuries are not back.

on the rest of the squad…

Everyone else is similar to where they were. Monreal is not back yet. The likes of Giroud, Debuchy and Walcott are unavailable.

He’s available, he’s in normal training today and I don’t think there will be a problem.

Arsenal will be hoping to get back to winning ways after losing to Southampton in the Capital One Cup on Tuesday night, with Arsene Wenger looking for a confidence-boosting win ahead of a key week that will also see the Gunners take on Galatasaray and Chelsea.