Chelsea will look to cement their place at the top of the Premier League when they take on Aston Villa at Stamford Bridge on Saturday. Here’s the team news 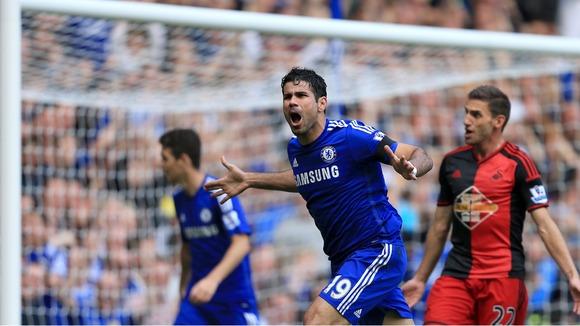 Ahead of the game, Jose Mourinho has been speaking to the media at his pre-match press conference this afternoon and gave Chelseafc.com a team news update including the latest on Diego Costa and Ramires.

Costa was rested for the Blues midweek League Cup win over Bolton Wanderers with Mourinho previously admitting the striker isn’t capable of playing three games a week yet due to his ongoing hamstring problems.

However, after enjoying a breather on Wednesday, the Chelsea boss has confirmed that Costa will start against Villa but questioned whether he’ll be able to feature against Sporting Lisbon in the Champions League next week.

Otherwise the West Londoners are in great shape with Mourinho confirming that Ramires is the only player unavailable as the Brazilian continues to nurse a muscle injury that’s expected to keep him out until after the international break.

‘Ramires,’ said Mourinho, when asked who was unavailable for the game. ‘Everybody else is good.

‘It’s a muscular injury, he won’t be able to play on Tuesday [against Sporting Lisbon] or even against Arsenal.

‘He needs the two-week international break [to recover], maybe he will be back after that.

‘Diego plays tomorrow and starts without problems. The question is always the same; can he finish the game and be in condition to play in Lisbon 48hrs later?

‘I don’t know but at the moment Im not thinking about Sporting or the Champions League, I’m thinking about Aston Villa and the Premier League. He plays for sure, he starts the game for sure and he’s in a very good condition to start.’

Chelsea head into the weekend action sitting three point above Aston Villa – who are joint second in the table with Southampton – so Mourinho will be hoping to continue their excellent start to the new season and put further distance between his side and the chasing pack.