Manchester United are ready to renew their interest in €30m-rated Chelsea target Miranda when the transfer window reopens in January, according to reports.

The summer transfer window may be closed but managers are already thinking ahead to future transfer windows so we’ll bring you all the latest news and gossip. Today, Man Utd are linked with Chelsea target Miranda. 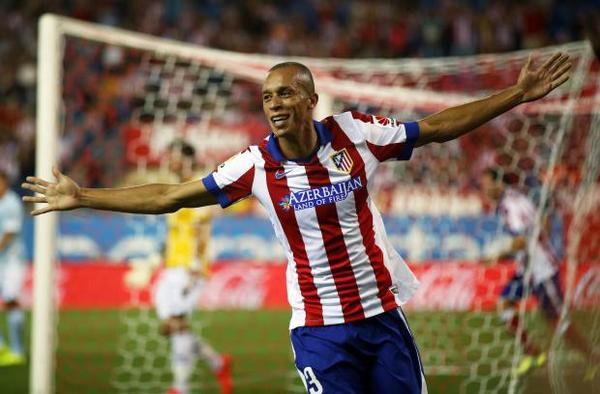 Manchester United are ready to renew their interest in €30m-rated Chelsea target Miranda when the transfer window reopens in January, according to reports.

Both United and Chelsea were strongly linked with the Brazilian centre-back during the summer months with the Blues believed to have seen a £20m bid rejected by Atletico Madrid before Miranda opted to remain at the Vicente Calderon.

United went on to sign Marcos Rojo from Sporting Lisbon but Louis van Gaal has failed to adequately replace both Rio Ferdinand and Nemanja Vidic with the former champions defensive problems well documented already this season.

The Red Devils head into this weekend with only one available senior centre-back due to a spate of injuries and suspensions and their poor form sees them languish down in 12th place in the Premier League table following last weeks disappointing 5-3 loss at Leicester City.

It looks as though van Gaal is getting ready to dip into the transfer market to strengthen his options at the back as the Express claim that United will make a renewed attempt to lure Miranda to Old Trafford in when the transfer window opens in January.

The newspaper suggests that although the 30-year-old centre-back chose to stay in Spain this summer, he remains keen on a switch to England but United will have to meet Atletico’s €30m (£24m) asking price to get a deal agreed.

While Miranda would be an excellent addition, it remains to seen whether United would be willing to pay that kind of money as €30m would be a huge figure for a player who’s now 30 and will have little sell-on value – although the Express do suggest that United could look to use Juan Mata as a make-weight in any potential deal to reduce the cost.

It remains to be seen whether Chelsea will renew their interest as Jose Mourinho didn’t end up signing another centre-back in the summer to replace David Luiz. The Blues do have youngster Kurt Zouma but it’s not clear whether Mourinho believes he’s ready to play regularly at the highest level yet.