Arsene Wenger has given an injury update on Jack Wilshere, Aaron Ramsey and Mikel Arteta after the trio picked up injuries during Arsenal’s draw with Spurs. 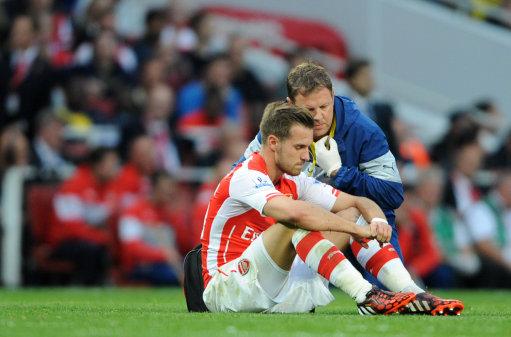 Arsenal were held to a 1-1 draw by North London rivals Tottenham at the Emirates on Sunday afternoon in a game that saw us pick up three injury concerns.

Mikel Arteta was the first to be forced off midway through the first half after suffering a calf injury while Jack Wilshere received lengthy treatment just minutes later after turning his ankle as he surged into the Spurs penalty area.

The midfielder was able to continue and see-out the remainder of the half but you could tell he wasn’t comfortable and the 22-year-old was eventually substituted in the 63rd minute.

To compound our midfield injury woes, Aaron Ramsey was also forced off after picking up a hamstring injury with the Welshman being replaced by Santi Cazorla on the stroke of half time.

Arsene Wenger spoke to Arsenal.com after the game and gave an update on the trio, with the boss admitting he isn’t sure yet how long they would all be out for but he was able to confirm that Ramsey and Arteta are certain to miss our upcoming games against Galatasaray and Chelsea.

It’s not clear whether Wilshere will be available as his ankle will have to be assessed further, but suddenly we’re looking extremely thin in midfield as Abou Diaby is also still not considered fit enough to be in contention for the first team yet.

I don’t know how long they’ll be out.

on what the injuries are…

I think Ramsey is a hamstring and Arteta is a calf. Wilshere [has] an ankle [problem].

on whether he’s concerned about Wilshere and Ramsey being injured…

Not constantly. Wilshere, if you look at the incident again, has been tackled and turned his ankle over. Ramsey is a concern that he did his hamstring. I don’t understand because he had a good rest this week, I didn’t play him against Southampton on Tuesday night. It’s a surprise because he’s usually a resistant boy.

Wilshere, I don’t know. The two others are out for Chelsea for sure.

on what it means with Champions League coming up midweek…

Suddenly we are short because if we lost three players today, and let’s not forgot that we already have two out long-term plus Walcott, that’s six. Diaby is not ready so it starts to become a worry.

on whether Wilshere will be available for Galatasaray…

Let’s pray that Wilshere’s ankle injury is nothing serious otherwise we’re going to be heading into two huge games against Galatasaray and Chelsea with limited options in the middle of the park.

If Jack’s ruled out along with Arteta and Ramsey then we might have to move Alex Oxlade-Chamberlain back alongside Mathieu Flamini, while Tomas Rosicky, Santi Cazorla or Francis Coquelin are other possibilities.