Arsenal are facing a mounting injury crisis ahead of games against Galatasaray and Chelsea with Aaron Ramsey set to miss at least a month with a hamstring. 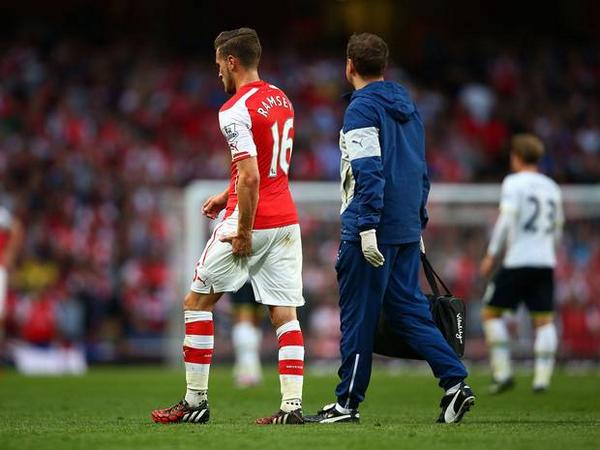 Arsenal are facing a mounting injury crisis ahead of crucial games against Galatasaray and Chelsea with reports today claiming that Aaron Ramsey is set to miss at least a month with a hamstring.

Ramsey was forced off just before half-time during our 1-1 draw with Tottenham on Saturday evening after pulling his hamstring and the Telegraph are one of several media outlets who are suggesting that Arsenal staff fear the injury will keep him on the sidelines for ‘at least’ a month.

The 23-year-old is sure to undergo more tests to determine the full extent of the problem but if the initial prognosis is accurate, then it will be a huge blow as the midfielder could miss up to eight matches.

Ramsey is certain to miss the upcoming games with Galatasaray and Chelsea, but a month out would also see him ruled out of fixtures against Hull, Anderlecht, Sunderland and Burnley after the international break. If he’s out for any longer, then the Welshman would also be at risk of missing further games against Anderlecht and Swansea before the second international break in November.

That’s a lot of games to miss during a crucial part of the season so fingers crossed the injury isn’t as bad as first feared and we have some positive news over the coming days once he’s been fully assessed.

However, the first concern is to get through the next two games and it looks like Arsene Wenger is going to have to field a patched-up midfield as Mikel Arteta is also going to be on the sidelines for at least two weeks with a calf injury that he too picked up against Tottenham.

The boss has admitted he’s going to analyse what happened after being left baffled by the two muscle injuries suffered by Ramsey and Arteta as the pair were both left out for last weeks League Cup clash with Southampton meaning they were fully resting heading into the Spurs game.

“We have to really look at what happened.

“There’s no logic as it’s two players who were not involved in the week – no Arteta, not Ramsey – and they had quite a light week for them. We have to analyse what happened there. I don’t understand.” Wenger is quoted as saying by the Mirror

To make matters worse, reports suggest that Jack Wilshere is also a major doubt to face Galatasaray and the youngster will have his injury assessed today to see if there is any lasting damage after he twisted his ankle during the first half on Saturday.

The 22-year-old was able to soldier on until the 63rd minute before being replaced by Santi Cazorla, but if he too is ruled out on Wednesday that it leaves Wenger with a real headache in midfield.

Mathieu Flamini is certain to play but it remains to be seen who would partner the Frenchman. Cazorla, Diaby and Coquelin are all possibilities but I’d personally like to see Alex Oxlade-Chamberlain play in the middle is Wilshere is unavailable.