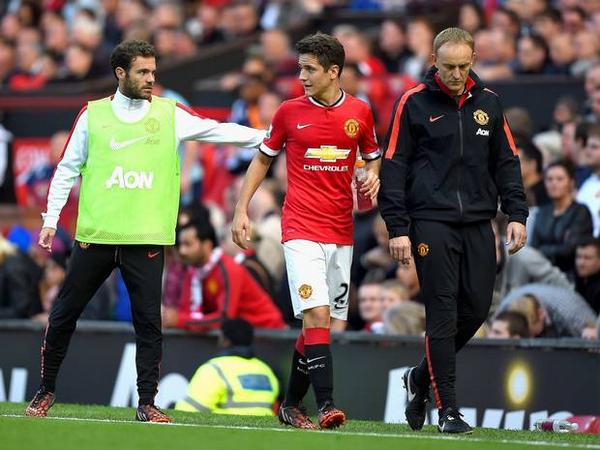 Ander Herrera has promised he’s already working to get back to full fitness after Manchester United confirmed the midfielder is set for a spell on the sidelines with a fractured rib.

The 25-year-old was forced off in the 74th minute during United’s 2-1 victory over West Ham on Saturday with what was initially thought to be a back injury.

We brought you the news earlier today that United were forced to postpone publishing a statement on Monday night after it emerged the injury was worse than first thought.

United finally released an update on ManUtd.com on Tuesday afternoon that confirmed the bad news that Herrera is facing a spell on the sidelines after fracturing a rib at the weekend.

“The Spaniard was substituted in the 74th minute and the club will continue to monitor his progress over the next few weeks.” the statement read

While United refused to set a timeline on how long the midfielder will be out for, the BBC claim that the Spaniard is set to miss ‘several weeks’ with the injury.

If true, the news will come as a major blow to boss Louis van Gaal as the Dutchman is already having to deal with a lengthy injury list which includes fellow midfielders Michael Carrick, Marouane Fellaini and Ashley Young, while several key defenders are also currently on the sidelines.

Herrera has already taken to Twitter to express his disappointment at picking up an injury so soon in his United career, but he’s promised that he’s already working hard to get back on the pitch as soon as possible.

A real shame this injury, but now's not the time to feel sorry for myself. I'm already working to be back as soon as possible!

The player is certain to miss this weekends clash with Everton but thankfully there is then a two-week international break which will give the midfielder time to work on his fitness.

If he recovers quickly there’s a chance he could return to face West Brom on the 20th October or failing that, the former Athletic Bilbao ace could be back for the visit of Chelsea the following week, but we’ll have to see how his rehabilitation goes over the next couple of weeks.