Spurs kicked off the campaign with a drab 0-0 draw at Partizan Belgrade two weeks ago so will be keen to get their first three points on the table.

Mauricio Pochettino is expected to make wholesale changes once again as he continues to field vastly different teams in Europe compared to domestic competitions.

Hugo Lloris is likely to be rested with Michel Vorm starting in goal, while Ben Davies should come in at left-back with Danny Rose is a doubt for the game after being forced off during the 1-1 draw at Arsenal.

Eric Dier, Fazio and Vlad Chiriches are also expected to come in to the back four while Nabil Bentaleb could start alongside Mousa Dembele in midfield – although Paulinho and Benjamin Stambouli are also pushing for starts.

Harry Kane has impressed this season so should get a run-out in attack alongside Aaron Lennon and Andros Townsend with the likes of Christian Eriksen and Nacer Chadli given a breather, while Roberto Soldado is expected to lead the line with Emmanuel Adebayor rested.

This is the team we think Pochettino will select: 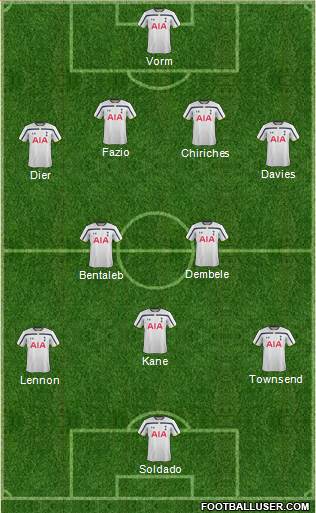