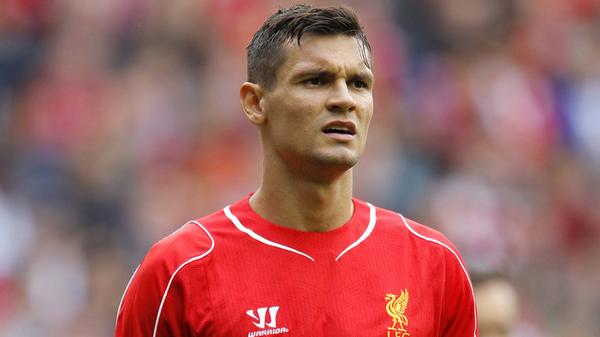 Liverpool have been dealt a major injury blow with the news that Dejan Lovren has been sent back to Merseyside after picking up an abdominal injury while on international duty.

Lovren has been away with the Croatia national team this week preparing for their upcoming Euro 2016 qualifiers away at Bulgaria on Friday and at home to Azerbaijan on Monday.

However, the Croatian Football Association released a statement on their website revealing that the 25-year-old picked up an abdominal injury during training on Wednesday.

He was sent to see a specialist who confirmed he had torn a muscle, so Lovren has now been sent back to England so Liverpool can carry out their own assessment before deciding the best course of action and how long the centre-back will be out for.

“During training on Wednesday Lovren felt pain in the abdominal wall.

“Igor Boric (a specialist) at St Catherine Hospital showed there was a tear and he will not be ready for performances in Sofia and Osijek.” source: Sky Sports

At the time of writing, Liverpool are yet to make any official announcement about the injury but the Liverpool Echo are reporting that the club have confirmed to them that the Croatian FA have been in touch to notify them of the problem.

The news will come as a major blow to Brendan Rodgers as Lovren has been a key component in his starting eleven since making the move from Southampton in the summer, with the defender ever-present in the Premier League so far.

With Mamadou Sakho still at least 10 days away from returning from a hamstring strain, if Lovren is ruled out for any period of time, which seems likely, then Rodgers will be left with just two fit central defenders in Martin Skrtel and Kolo Toure for their upcoming games against QPR and Real Madrid.

Martin Skrtel and Glen Johnson have only recently returned from injury, while Jon Flanagan, Joe Allen, Emre Can and Daniel Sturridge are also on the sidelines, so Rodgers has had his fair share of injury issues to deal with this season.