Manchester United are already working hard on securing a potential £40m deal for Borussia Dortmund defender Mats Hummels in January, according to reports.

The summer transfer window may be closed but managers are already thinking ahead to future transfer windows so we’ll bring you all the latest news and gossip. Today, Man Utd are linked with Mats Hummels. 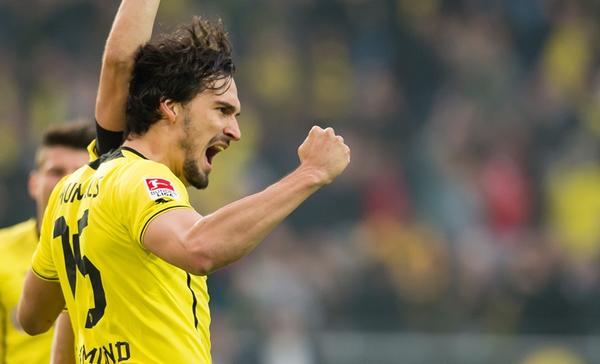 Manchester United are already working hard on securing a potential £40m deal for Borussia Dortmund defender Mats Hummels in January, according to reports.

United boss Louis van Gaal splashed out over £150m in the summer but focused most of his attention on strengthening his attacking options with the likes of Angel Di Maria and Radamel Falcao making big-money moves to Old Trafford.

The Dutchman did manage to bring in Marcos Rojo and Luke Shaw but with experienced trio Patrice Evra, Rio Ferdinand and Nemanja Vidic all leaving in the summer, the former champions have been left short at the back this season.

It’s forced van Gaal to blood several youngsters and with the likes of Phil Jones, Chris Smalling and Jonny Evans all having their injury problems, youngsters like Tyler Blacket and Paddy McNair have been thrown into first team action in recent weeks.

While the young defenders have performed admirably, it’s believed that van Gaal is hoping to bring in a top class centre-back when the January transfer window opens and it appears he’s set his sights on a World Cup winning defender.

The Metro cite reports coming out of Spain that claim United are already working on a deal for Borussia Dortmund star Mats Hummels after van Gaal made him his number one target.

The newspaper suggests that Dortmund are struggling to agree terms with Hummels due to his excessive wage demands and with United ready to offer him a huge salary, it’s understood a move to Old Trafford is becoming ‘increasingly likely’.

United were strongly linked with the German international in the summer but with contract negotiations stalling, it looks like the Red Devils are ready to try their luck again and the Metro claim that they are willing to pay up to £40m to get their man this winter.

While that kind of money will no doubt be hugely tempting to Dortmund, I simply don’t see the Bundesliga giants selling their skipper mid-season. Hummels is an integral part of Jurgen Klopp’s team and with Dortmund on-course to qualify for the knockout stages of the Champions League, I think United may have to wait until next summer to secure any deal for the 25-year-old.